A decade ago, Brit Marling graduated from Georgetown with a degree in economics, turned down a job offer from Goldman Sachs and moved to Los Angeles to be an actress. When she arrived, without so much as a car commercial on her resume, she found that the only roles available to her were variations on “Terrified Girl No. 1” in slasher films. Disinterested in playing damsels in distress, she says, she could think of only one way forward: She’d write her own roles.

On an uncharacteristically hot fall day at a lower Manhattan coffee shop, Marling recalls hitting that wall. “I’m not finding representations of women that are that interesting, so if you want to act and the material isn’t Chekhov, how do you find your way in?” She found hers by co-writing, co-producing and starring in two films, Another Earth and Sound of My Voice, the latter of which debuted at the 2011 Sundance Film Festival to impressive buzz about her prospects in the industry.

Much hay was made, at that time, of her unconventional path to Hollywood, and more still of her appearance—“How to Succeed in Hollywood Despite Being Really Beautiful,” read one New York Times Magazine headline—as though her “long, fine, blonde hair of the kind rarely seen outside ads for conditioner” (as another profile put it) was somehow incongruous with her ability to make great movies.

Yet the same lack of quality roles that led Marling to start writing has motivated some of Hollywood’s leading women, actresses like Sandra Bullock and Julia Roberts, to pursue parts originally written for men. Marling’s new movie The Keeping Room (out Sept. 25), is a slight twist on that trend: The roles were written for women to play, but the characters inhabit more masculine gender roles. “It was one of the first times I read something where I was like, I have to play this role, and I would do a lot to go after it,” Marling says. This time, she didn’t even have to write it herself.

Written by first-time screenwriter Julia Hart, the film tells the story of two sisters, Augusta and Louise (Marling and Hailee Steinfeld) and a former slave named Mad (breakout star Muna Otaru), under siege by Union soldiers at the close of the Civil War. The sisters’ mother died long ago, their brother and father left to fight, and Union soldiers on Sherman’s March—a campaign to break the spine of the South by pillaging and burning civilian homes—is closing in. Much of the film takes place in the titular “keeping room,” from which the three women defend themselves from two soldiers shown committing rape and murder in the movie’s opening moments.

Marling’s Augusta is the trio’s leader, as handy with a shotgun as she is precise with an axe. (Throughout filming, she says, her hands were blistered and bloody from chopping wood and riding horses, so much so that many of the wounds that might otherwise have been rendered with makeup are real.) Though the action is driven by the struggle for survival, the quieter moments reveal the confusion of a girl yearning to be a woman, but called upon to be a man. “She’s filling a traditionally masculine gender role, but she’s still a young woman,” says Marling. “She’s still wearing that dress as she hunts to feed her family and holds a shotgun up to threatening Union soldiers.”

The Keeping Room straddles genres: it has been branded a feminist Western, but it’s also a home-invasion thriller, a historical drama and a character-driven rumination on the human toll of slavery. Marling sees it, more than anything, as the latter. “I think the movie’s a love story between Augusta and Mad, and their journey of becoming sisters,” she says. At the heart of the story is the “relationship between two women as they negotiate the time that they grew up in and the rules of that space and try to come to their own understanding of it.”

Reviews will likely describe Augusta as a “strong woman”—exactly the type of role that so many actresses covet. But for Marling, that’s an oversimplification of both this character and the ones she hopes to continue playing. “We want to correct the presentation of women, and the instinct to do that is to swing really far in the opposite direction just to bring the needle somewhere into the middle,” she says. “But at the same time, you want to be honest with the experience of being female, which is often feeling weak, feeling fragile, full of doubt or shame.”

It’s why Marling retreated from the skyscrapers of Wall Street for the life of an actress in the first place. “It’s signing up to be an empath, to slowly remove all of your skin and your armor and your exoskeleton,” she says, “until you’re just a raw, pumping, bleeding heart.” 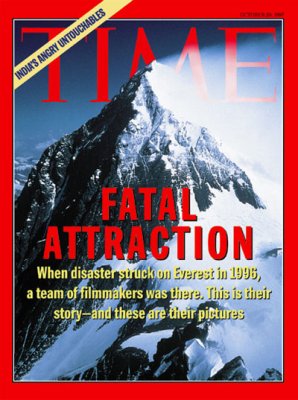 See the True Climb Behind the Movie 'Everest'
Next Up: Editor's Pick