Hillary Clinton said Tuesday she opposes the construction of the Keystone XL oil pipeline, an announcement that comes after months of pressure from environmental groups and liberal voters and indecision from the White House.

“I oppose it,” Clinton said while campaigning in Iowa in response to an audience member’s question. “I think it is imperative that we look at the Keystone Pipeline as what I believe it is—a distraction from the important work we have to do to combat climate change, and unfortunately, from my perspective, one that interferes with our ability to move forward to deal with all the other issues.”

“And I oppose it because I don’t think it’s in the best interest of what we need to do to combat climate change,” Clinton added.

Prominent environmentalists have been calling on the Democratic presidential candidate to oppose the pipeline for months, and her lack of a stance was a major point of difference between her and the other candidates in the Democratic primary, who mostly oppose it.

Clinton initially seemed to favor the pipeline as secretary of state in 2010, but she has surrounded herself by staff and advisors like campaign chairman John Podesta known to strongly oppose the project.

The Democratic frontrunner’s reluctance to strongly oppose the pipeline reflects the project’s diminished importance among environmentalists, who no longer see the pipeline as a make-or-break climate change issue. While early reports suggested the pipeline would greatly accelerate greenhouse gas emissions, subsequent research found much of the gas would likely be extracted from the Canadian tar sands anyway.

Still, progressives counted Clinton’s announcement as a victory. “This is a smart move by Sec. Clinton that shows she’s clearly listening to grassroots progressives on one of the major battles of our time,” said Neil Sroka, communications director for Democracy for America.

Clinton has explained that as a former Secretary of State and member of the president’s Cabinet who helped weigh the effect of the pipeline, it would be wrong for her to comment on a decision that the White House had not yet made. In recent days, Clinton said that her own decision on the pipeline would be coming soon.

The White House was briefed on Clinton’s position on the Keystone project before she made her comments on Tuesday, a Clinton aide said.

“Now Clinton feels she owes it to the American people to make it clear where she stands on this issue,” the aide said.

In a statement, one of Clinton’s rivals for the Democratic nomination, Vermont Sen. Bernie Sanders, applauded the decision in a backhanded way.

“As a senator who has vigorously opposed the Keystone pipeline from the beginning, I am glad that Secretary Clinton finally has made a decision and I welcome her opposition to the pipeline,” he said. “Clearly it would be absurd to encourage the extraction and transportation of some of the dirtiest fossil fuel on the planet.”

“On issue after issue—marriage equality, drivers licenses for undocumented immigrants, children fleeing violence in Central America, the Syrian refugee crisis, and now the Keystone Pipeline, Secretary Clinton has followed–not forged–public opinion,” he said in a statement. “Leadership is about stating where you stand on critical issues, regardless of how they poll or focus group.”

Clinton has announced an ambitious climate proposal that would vastly increase the number of solar panels to half a billion by 2021 and said that she would put the United States on a path toward generating enough renewable energy to power every home in the country by 2027. 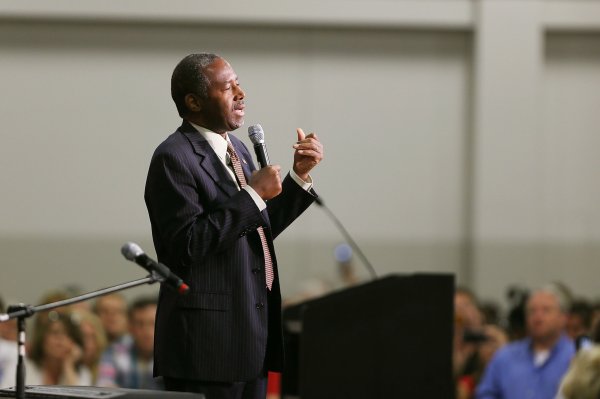 Ben Carson Backpedals on Muslim Comments
Next Up: Editor's Pick