‘Honest Gil’ Fulbright, the satirical politician who ridicules the influence of money in America’s political system, is back in 2016.

In 2014, ‘Honest Gil’ Fulbright made a (satirical) run for the U.S. Senate in Kentucky, (fake) challenging then Senate Minority Leader Mitch McConnell and his Democratic rival Alison Lundergan Grimes in what was then the most expensive Senate election of all time. Now, good ol’ Gil is back, and he’s set his sights even higher: the presidency.

In his cookie-cutter political commercial—shot from dramatic camera angles and set to bland music—Fulbright promises to be “a president with the conviction to nod, the courage to point, and the experience to cram buzzwords into everything I jobs.” Fulbright also promises to make education “um…good,” to improve the economy “by repeating the word jobs,” and “blablabla, something to get votes from women and minorities.”

Fake or not, the ad has resonated with voters. In the first 24 hours after announcing his campaign on Monday, Fulbright’s commercial received over 1 million views. Represent.Us, the campaign finance reform group behind Fulbright’s mock campaign had raised more than half of its $50,000 fundraising goal on Indiegogo.

Fulbright’s campaign may be striking a nerve because of the growing amount of money in politics this election cycle. At a projected $10 billion, the 2016 campaign is set to be the most expensive election in U.S. history, leading real candidates to also make campaign finance reform a major issue.

Many supporters of Donald Trump, the Republican frontrunner, credit the fact that Trump is personally financing his campaign—and thus remaining independent from donors and lobbyists—with winning them over. Democratic candidate Bernie Sanders has refused to take money from Super PACs, and campaign finance reform activist Larry Lessig has entered the fray, vying for the Democratic nomination in a campaign chaired by Wikipedia founder Jimmy Wales. 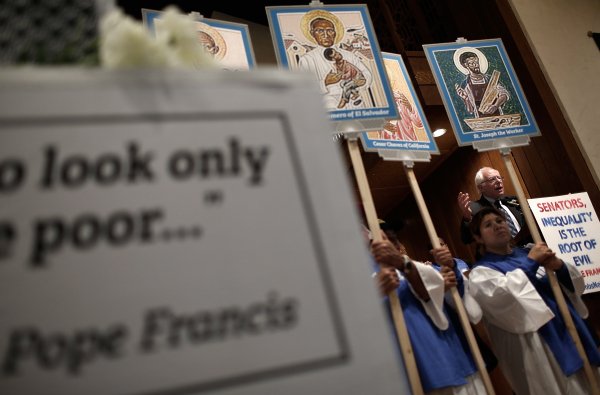