A transgender woman is at odds with American Airlines and the Transportation Security Administration after she says a routine security check turned into a nightmare.

Shadi Petosky took to Twitter to air her grievances Monday night, saying that she was inconvenienced and humiliated after TSA agents at Orlando International Airport found an anomaly in her body scanner screening.

Airport body scan machines require agents to select male or female, the New York Times reports, and a 2014 al-Jazeera report notes that detection of unexpected shapes can be considered potential threats, leading to additional scrutiny of the passenger.

Petosky told the Times that the TSA agent handling her screening did not appear to know what she meant when she informed him that she is transgender, and asked her to go through the machine again with the settings changed to male. However, she says another TSA agent told her she could not go through the machine a second time and led her to another room. In all, Petosky said she was patted down twice, delayed by 40 minutes, and missed her plane, all while suffering considerable emotional distress.

The TSA said it reviewed video of Petosky’s treatment and that agents followed correct procedure.

“After examining closed circuit TV video and other available information,” TSA spokesman Mike England in an email to the Times, “TSA has determined that the evidence shows our officers followed TSA’s strict guidelines.”

The TSA’s guidelines for screening transgender passengers are outlined on the agency’s website:

American Airlines told the Times it disagreed with Petosky account of the incident. According to the airline, Petosky was quickly given a free boarding pass for the next flight to her destination, but Petosky says she was given the runaround and was almost removed by the police.

Supporters of Petosky have begun using the hashtag #TravelingWhileTrans to share their experiences and grievances on Twitter. 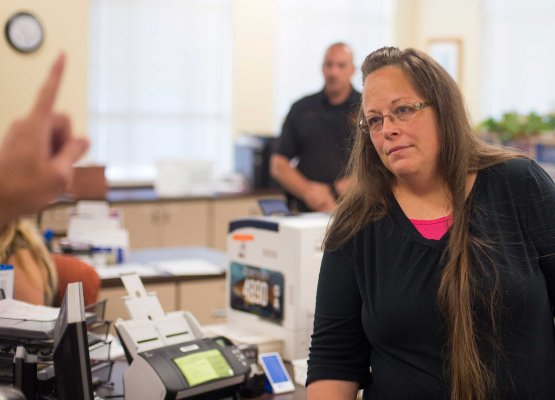 How Kentucky Clerk Kim Davis Is Still Objecting to Same-Sex Marriage
Next Up: Editor's Pick