Scream Queens is a Missed Opportunity for Fox, and Ryan Murphy

Ryan Murphy is uniquely positioned to make a show about college in the 21st century. The writer and producer is still best known for Glee, a series whose giddy musical numbers coexisted with a take-no-prisoners attitude towards every member of its high school student body; his short-lived NBC sitcom The New Normal let some of the air out of widespread liberal excitement over gay liberation with a venal, rude central couple who only occasionally learned or grew. Returning to network television Tuesday night with a series set on a college campus, Murphy might have made a series that had nasty, exaggerated fun at the expense of sheltered students and clueless administrators.

Scream Queens is not that series. The show, a loving homage to slasher movies as filtered through Murphy’s own sensibility, is giddily excessive, to be sure. But the degree to which it takes place on another planet—returning to earth only to comment on race by making fun of nonwhite people—makes it, so far, a major missed opportunity.

The two-hour pilot episode takes place largely at a sorority house at which, in 1995, a co-ed died under mysterious circumstances after giving birth. Twenty years later, the Greek sisters still seem, somehow, stuck in the Clueless era, from their dress to their bearing to their concerns; at least two of the Chanels, as the central clique is known, are motivated in all they do by their desire to become network newscasters. (Shouldn’t they, really, be trying to host YouTube makeup tutorials?) As the leader of the group, Emma Roberts is mean in a way that’s delicious but that we’ve seen her do, for Ryan Murphy, before.

On American Horror Story, Murphy’s cable series which returns for its fifth season next month, Murphy is able to let loose; love or hate that show, it is entirely what it is. Scream Queens takes vague stabs at commentary—one of the characters has a “helicopter parent,” another takes a break from dying violently to send a tweet—but feels at a loss when it comes to connecting the dots more meaningfully. It’s as though so much effort was expended setting the stage with the sorority characters that the actual plot of the show, which is set into motion when a mask-wearing murderer starts picking off students, went underthought. Actual predatory behavior on campus, and the perception that the manner in which it’s covered by the press and prosecuted by institutions is inept and inadequate, is among the biggest news stories in America. That’s why the use of Scream Queens‘s setting and willingness to court scandal feels wasted when going after randomly chosen targets. There’s no good way to make a comedy about violence for a broadcast network, but Ryan Murphy’s eagerness to congratulate himself for courting scandal just shows Scream Queens‘ particular pointlessness.

The too-rare moments when Scream Queens has anything to say about the particular sensitivities and oddities of campus culture in 2015 nestle up to weaker moments involving Jamie Lee Curtis’s villainous-ish dean, whose malign motivations might be fun if she didn’t just rattle them off as exposition to a student she was bedding. And genuinely odd touches that reveal a fun camp sensibility—frat brothers sleeping, like Bert and Ernie, in side-by-side double beds, or Nasim Pedrad’s commitment to the role of a ditzy sorority alumna—are put right up against a brutality that’s way too real.

To complain about the racial aspects of Ryan Murphy’s television shows is to miss the point entirely. From the still-running American Horror Story to the late Glee and The New Normal, the showrunner’s projects all put forth a with-it liberal sensibility in which line-crossing cracks about nonwhite (or handicapped, or gay, or…) people are proof of subversive wit. But it’s the muddledness of Scream Queens. It tends to get forgiven because the Murphy sensibility is so baked into shows that are so confident in what they are doing; Glee paired wild insensitivity with a love-yourself message so confidently one had to go along or stop watching.

But, here, the crassness feels more than ever like a put-on. There’s nothing fun about watching Roberts call her housekeeper “White Mammy” and making her quote Butterfly McQueen’s lines from Gone With the Wind, and nothing that creates a greater understanding of her character; we can tell she’s a monster without being goosed to think her race-tinged bullying is a little funny. The sensibility seems shot out with a pellet gun: A hearing-impaired character is brutally murdered while failing to hear her sisters’ screams. She’s goofily screaming “Shake It Off” nearly to her final moment. Whom is the joke on, here? (We’re also informed, “Like all deaf people, she has horrible halitosis.” Unsatisfied with existing stereotypes, Murphy has created new ones.)

Worst of all is what’s done to Niecy Nash, this year an Emmy nominee for her role on Getting On. Nash gets to appear as a loud, stupid, and lazy security guard who gorges on burgers and refuses to climb stairs to protect her charges, a joke that’s both complicated (playing on the idea that black people are smart enough not to court danger in a horror-movie scenario) and so muddled as to lose its edge. “You cannot win an Emmy for a role that isn’t there,” Viola Davis said at this year’s ceremony; nor is an actress likely to triumph over anything beyond the obstacles Murphy creates for her. It’s a role whose attempted subversion of tropes is just a hair away from acting out the trope itself.

It’s hard to criticize a show for not trying to be something different—and if Scream Queens just wanted to be a competently done horror series, it’d have to be judged on that basis. But the show clearly wants to be a satire of horror, and society, and the racial attitudes that remain an obsessive concern of Murphy’s. Had it narrowed its aperture, tried to be a show that took on mismanagement of criminal doings on a college campus, or a simple genre homage, or a diva smackdown for gay audiences only, it might have been a success. But Ryan Murphy wants his shows to do it all, including stuff that’s never really worked for him. And in an era when actresses who don’t look like Emma Roberts are demanding respect more loudly than ever, it shouldn’t be a surprise if people change the channel. 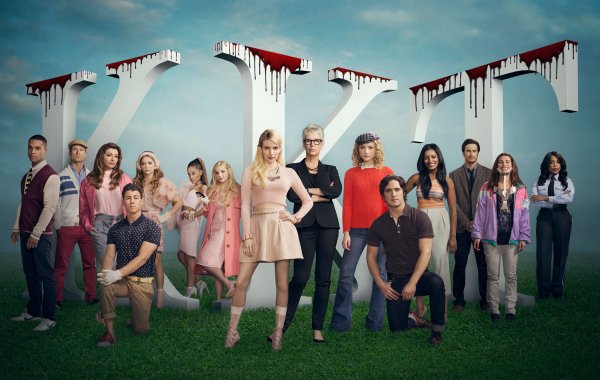 The Parents Television Council Thinks Kids Should Not Be Watching These Shows
Next Up: Editor's Pick