What the Peanut Poisoning Case Means for the Food Industry

On Monday, former food industry CEO Stewart Parnell, 61, was sentenced to 28 years in prison for his role in a massive 2008-2009 salmonella outbreak that caused sickness in more than 700 Americans and nine deaths.

Parnell, the former CEO of the peanut processing company Peanut Corporation of America (PCA), was sentenced alongside his brother Michael Parnell, who was sentenced to 20 years in prison. Mary Wilkerson, a former manager of quality control at PCA, was sentenced to five years. The sentencing was historic, marking the first sentence of significant jail time for causing foodborne illness. Parnell’s case made headlines pre-sentencing when the U.S. Probation Office calculated that based on his convictions (over 65 felony counts), he could spend life in prison.

However, it is not the first food safety case to be very publicly tried. In the last three years, U.S. prosecutors have won major convictions in at least four foodborne outbreak cases. In 2014, brothers Eric and Ryan Jensen of Jensen Farms were sentenced to five years probation and $150,000 each in fines for their role in a cantaloupe listeria outbreak that sickened more than 140 people and killed more than 30. This year, Austin “Jack” DeCoster and his son Peter DeCoster of Quality Egg LLC were sentenced to three months in jail for a 2010 salmonella outbreak. (They’re appealing the sentence.)

“I think there is a general aura of apprehension and a little bit of uncertainty as it relates to when the next foot is going to drop,” says Shawn Stevens, a global food safety attorney who helps companies eliminate food safety risks. “I’ve already had multiple conversations today with clients asking what they can do within their companies to avoid a similar fate. I’ve counseled them all to tell their employees that, starting this morning, food safety comes first.”

MORE: Peanut Executive Sentenced to 28 Years in Prison for Role in Salmonella Outbreak

Though it’s still early to determine whether food safety litigation is indicative of a trend, the threat of legal action for foodborne illness cases is spooking members of the industry. Parnell was convicted of a felony and found to intend to defraud based on emails and fabricated certificates of analysis of his peanut product shipments. However, under the Federal Food, Drug, and Cosmetic Act (FDCA), executives can also be charged with a misdemeanor, tried and convicted for holding a position of authority and having had the ability to prevent a food safety violation. Officials do not need proof of fraudulent intent if they choose to pursue a misdemeanor conviction, which Food Safety News reports could still lead to up to a year in jail and a fine up to $250,000.

Food safety lawyer Bill Marler told TIME last week that he’s seen many moments of panic among industry higher ups at food safety conferences where he often speaks.. “People are going, Really? I could be charged with a crime?’” he said. “There’s no question that this is on people’s radar. I see people talking about Stewart Parnell and saying, That would never happen to me, but then they look at DeCoster or Jensen and think, Wait a second, that could easily happen to me.”

This knowledge could pave the way for even greater focus on food safety compliance. “What we’ve learned in the last decade with increasing frequency is that our assumptions are being tested, and no food product is immune from widespread contamination,” says Stevens. “We used to live in a period where we thought if outbreaks were going to occur, they would happen in ground beef and maybe in a handful of other products usually associated with foodborne pathogens. What we are learning is it is not so much the food but the facilities in which they are being produced [that are causing problems].”

Stevens speculates that the FDA will continue to use criminal sanctions to enforce regulation. “I think the Parnell case is especially egregious, but it serves as a reminder to us all that even a single positive finding of salmonella or listeria in a food processing facility should be cause for alarm,” he says. “If we are finding pathogens in facilities, we need to do everything we can to find the reason why and make sure it doesn’t happen again.”

Unfortunately, it’s not uncommon for tainted food to make it into the food system. The Centers for Disease Control and Prevention (CDC) estimates that each year roughly 48 million Americans get sick, 128,000 are hospitalized and 3,000 die of foodborne diseases. In 2013, there were 818 distinct foodborne disease outbreaks that caused 13,360 illnesses, 1,062 hospitalizations and about 20 deaths. There’s currently an ongoing listeria outbreak linked to soft cheese: 24 people in nine states have been infected, including five women who were pregnant. One woman lost her fetus due to the infection.

“The sentences handed down today to officials associated with the Peanut Corporation of America demonstrate the consequences for those whose criminal actions threaten that trust by introducing contaminated food into the marketplace,” said Stuart F. Delery, Acting Associate Attorney General at the Department of Justice, in a statement regarding the Parnell case. “Our prosecution is just one more example of the forceful actions that the Department of Justice, with its agency partners, takes against any individual or company who compromises the safety of America’s food supply for financial gain.” 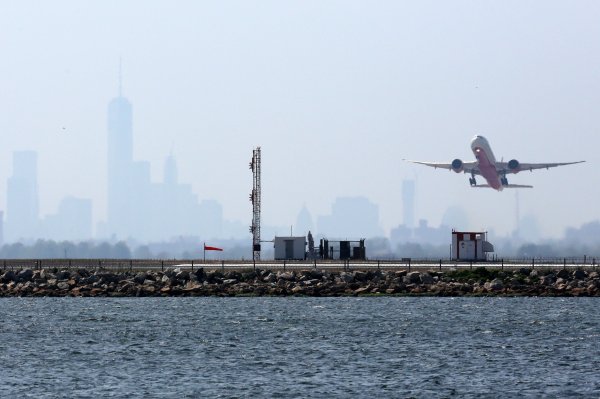 U.S. Will Stop Ebola Screenings for Passengers from Liberia
Next Up: Editor's Pick