Kim Davis, the Rowan County Clerk of Courts, listens to Robbie Blankenship and Jesse Cruz as they speak with her about getting a marriage license at the County Clerks Office on Sept. 2, 2015 in Morehead, Ky.
Ty Wright—Getty Images
By Denver Nicks

Kim Davis, the county clerk in Kentucky who spent five days in jail for refusing to give marriage licenses to same-sex couples, has returned to work but is now accused of deliberately spoiling licenses handed out by her deputies while she was imprisoned.

Davis, who has refused to issue licenses to both straight and gay couples since the Supreme Court legalized same-sex marriage in June, was jailed in early September for failing to carry out her official duties as Rowan County clerk. Deputies in her office resumed issuing marriage licenses, including to same sex couples.

But attorneys representing four couples seeking marriage licenses from her office allege that Davis changed the forms, deleting references to herself, the county clerk’s office and her deputies, and adding the note “pursuant to a Federal Court Order,” rendering the legality of the documents questionable. “They’re not valid in God’s eyes, for one,” Davis said in an interview with ABC News aired Tuesday morning.

Lawyers for the couples seeking marriages licenses have asked the court to step in yet again to enforce the court order legalizing gay marriage throughout the United States. “The adulterated marriage licenses received by Rowan County couples will effectively feature a stamp of animus against the LGBT community, signaling that, in Rowan County, the government’s position is that LGBT couples are second-class citizens unworthy of official recognition and authorization of their marriage licenses but for this Court’s intervention and Order,” ACLU lawyers representing the couples wrote in a court filing.

In her ABC News interview Davis said she’s been called Hitler, a hypocrite and a homophobe since she was rocketed into the public eye for her refusal to issue marriage licenses over her religious objections to gay marriage. “I’ve been called things and names that I didn’t even say when I was in the world,” she said. “Those names don’t hurt me.”

Davis’ lawyers earlier asked for an injunction from the Sixth Circuit Court of Appeals to remove Davis’s name from marriage licenses, allowing the county to issue licenses while accommodating Davis’s religious objections. The lawyers argued the accommodation was required under Kentucky’s Religious Freedom Restoration Act, which says that government cannot burden someone’s religious freedom without a compelling government interest.

Davis was elected to her position in November 2014 and, as TIME’s Josh Sanburn wrote earlier this month: 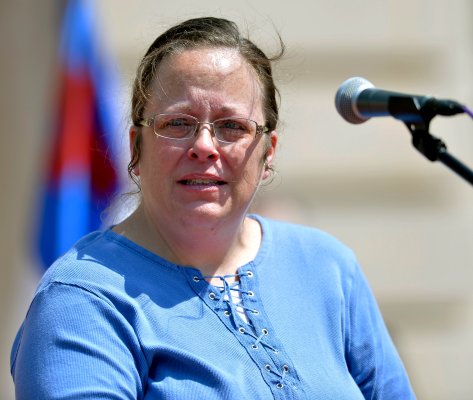