A court in Pakistan postponed the execution of a paraplegic convict on Tuesday, his lawyer said, ruling that his disabled status did not meet the country’s prison guidelines.

A Pakistani magistrate ordering the delay said 43-year-old Abdul Basit’s disability made him ineligible to be hanged under the jail manual, the BBC reported.

Pakistani law requires prisoners to be able to stand on the gallows, leading to concerns that Basit’s inability to do so will compromise his dignity as a prisoner — also guaranteed by law.

Basit was convicted of murder in 2009 — a murder he has denied committing — and was paralyzed from the waist down after contracting tubercular meningitis in prison. His first scheduled hanging in August was also postponed, but a court subsequently ordered prison authorities to go ahead with his execution despite a July 22 mercy plea to the President still pending.

It is not yet clear how long Tuesday’s postponement will last, but several rights groups have condemned the hanging of a wheelchair-bound prisoner as barbaric and cruel.

“In these circumstances the execution of Abdul Basit will offend against all norms of civilised justice, raise awkward questions about the Pakistan justice system’s insensitivity to humanitarian imperatives, and indict the Pakistan state and society as brutal entities,” the Human Rights Commission of Pakistan said in a statement.

According to Kate Higham, a Pakistan caseworker at London-based human-rights organization Reprieve, “There was a real risk that Basit could have faced horrific, prolonged torment — violating both the prison’s own rules and Pakistan’s ban on cruel and unusual punishment.”

Brad Adams, Asia director for Human Rights Watch, condemned Pakistan’s persistence with the death penalty and called for the South Asian nation to reform its justice system instead.

“Rather than confronting the inherent cruelty of capital punishment, Pakistani officials are puzzling over how to hang a man in a wheelchair,” he said in a release.

Pakistan has executed nearly 240 people since lifting a seven-year ban on the death penalty in December 2014. 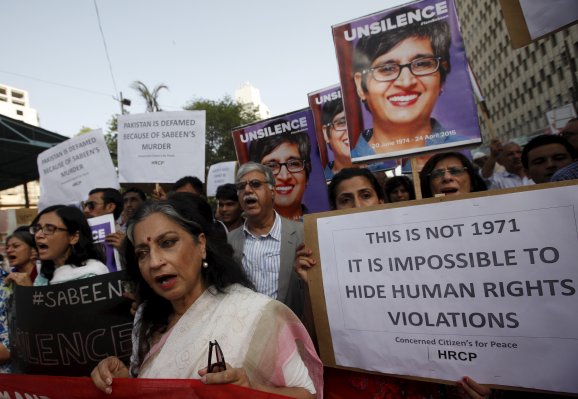 Witness to Pakistani Activist's Murder Shot Dead in Karachi
Next Up: Editor's Pick