Pope Francis arrives in the U.S. on Tuesday for five days of events in three cities.

The first stop on the multi-city tour is Tuesday in the nation’s capital, where President Obama will meet His Holiness when he lands at Joint Base Andrews. From there he’ll participate in a welcoming ceremony at the White House, canonize Junípero Serra at the National Basilica Shrine of the Immaculate Conception and address a joint session of Congress.

Then he’ll head off to New York and Philadelphia, where he’ll speak at the Sept. 11 memorial and conduct a mass at the World Meeting of the Families, respectively.

Read the full run down of the Pope’s schedule below:

4 p.m.: Pope Francis arrives in U.S. at Joint Base Andrews just outside of Washington. He will be greeted by President Obama.

9:15 a.m.: Pope Francis will appear at an official welcoming ceremony on the White House South Lawn then meet with President Obama.

11 a.m.: The Pope will parade around the Ellipse just south of the White House and the National Mall.

4:30p.m.: His Holiness will canonize Junípero Serra during a mass at the Basilica of the National Shrine of the Immaculate Conception.

10a.m.: Speech before a Joint Session of Congress followed by an appearance on the West Front of the Capitol at 11 a.m.

11:15 a.m.: The Pope will visit St. Patrick’s Catholic Church in D.C. and Catholic Charities of the Archdiocese of Washington, where he is expected to meet with clients of the St. Maria’s Meals program who will have gathered for lunch, including some who are homeless or live in shelters

8:30 a.m.: Pope Francis will address the United Nations General Assembly, which is celebrating its 70th anniversary. The Pope is also expected to attend bilateral meetings with the U.N. Secretary-General and the President of the General Assembly.

11:30 a.m.: His Holiness will pray, meet with families and deliver an address at a multi-religious service at the Sept. 11 memorial and museum at the site of the World Trade Center.

4 p.m.: Before taking his motorcade through Central Park, the Pope will visit a third grade class at Our Lady Queen of Angels school, a 120-year-old institution in East Harlem.

5 p.m.: Motorcade through West Central Park between 72nd and 60th Streets. A ticket and valid ID is required to enter.

10:30 a.m.: Mass at Cathedral Basilica of Sts. Peter and Paul, the mother church of the Archdiocese of Philadelphia

4:45 p.m.: The Pope is expected to talk immigration and religious during an address at Independence Mall

7:30 p.m.: Visit and prayer vigil at the World Meeting of the Families on Benjamin Franklin Parkway

4 p.m.: Mass at World Meeting of the Families. 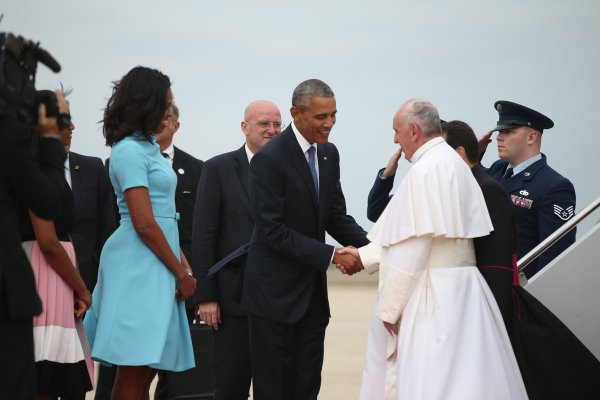 The Pope Arrives in Washington
Next Up: Editor's Pick