Science Says This Is the Sound Giraffes Make

It’s long been assumed that unlike other animals, giraffes are largely silent beasts. They don’t oink, moo or roar. But new research suggests perhaps giraffes do have a distinct sound: They hum.

It was previously believed that giraffes may make sounds that are impossible for humans to hear, similar to elephants, but the new research suggests otherwise. In a new study published in the journal BioMed Central, researchers recorded over 940 hours of sounds from giraffes at three zoos over an eight-year period. Beyond the occasional snort or grunt, the researchers recorded humming sounds that the giraffes made only at night. The humming was 92Hz in frequency, Wired reports, which is still audible to humans but pretty low.

Though more research is needed (even though the researchers called making the recordings “consuming, tedious and very challenging”) it’s possible that the giraffes are using these noises to communicate with one another.

“These results show that giraffes do produce vocalizations, which, based on their acoustic structure, might have the potential to function as communicative signals to convey information about the physical and motivational attributes of the caller,” the researchers conclude. 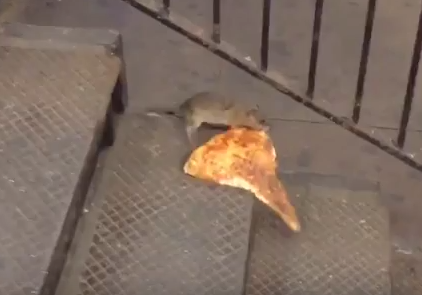 Watch a Rat Drag a Slice of Pizza Down Stairs in a New York City Subway Station
Next Up: Editor's Pick