One way to express shock or dismay in idiomatic English is to say you’ve “dropped your bacon sandwich,” an expression popularized by the 1990s-era “lads” magazine Loaded. It’s possible that British Prime Minister David Cameron had the biggest sandwich-dropping moment of all time when he saw the Daily Mail‘s Monday morning headline, “Drugs, debauchery and the book that lays Dave bare,” along with salacious excerpts from a biography by his party’s billionaire former treasurer Lord Ashcroft. Key among the revelations of college era pot-smoking and druggy parties was the claim by an anonymous “source” that Cameron had, as a youthful member of a “debauched” Oxford University group known as the Piers Gaveston Society, placed his non-parliamentary member inside the mouth of a dead pig. Cameron’s spokeswoman said she would not “dignify” the claim by offering a response to it but the PM’s “friends” have begun whispering to the press:

Any American reader wondering why a claim so thinly sourced would be treated with credulity by the press over the pond clearly isn’t that familiar with the British media. Its practitioners, themselves regularly compared to swine by members of the establishment, have reacted with unrestrained glee—hot takes, half-baked legal analysis, silly speculation about the impact on the national economy. Faced with a blank no comment, one of the Downing Street press gang instead quizzed the PM’s spokesperson on the status of the U.K’s pig semen deal with China, to the sniggers of colleagues. It’s a good old-fashioned media pile-on, in the local parlance. But there are good reasons this barely substantiated story has become a genuine media sensation in the U.K.—#snoutrage, #hameron and #piggate are currently the ruling hashtags—and not solely fodder for a skeptical tabloid item.

First is the remarkable similarity to an episode of the dystopian TV drama Black Mirror, which told the story of a Cameronesque PM forced to copulate with a pig on live television to avert the killing of a kidnapped princess. The show’s creator, Charlie Brooker, has even gone on record in the wake of Pig-gate to say he wasn’t aware of the rumor when he wrote it. That this wickedly satirical story might turn out to be true is just too good for the media to ignore. That it may also be too good to be true is not, apparently, worth thinking about.

Second is the pedigree of the co-author, Lord Ashcroft. No tabloid fabulist he, this billionaire entrepreneur was once the Conservative Party’s biggest donor, whose book was written not with a sleazy Fleet Street hack but with Isabel Oakeshott, a former political editor of the respected Sunday Times. That Ashcroft may have had an axe to grind with the PM, who denied him a plum job after becoming leader in 2010, seems not to have damaged his reputation as an unimpeachable source.

Third is the obsession in some quarters with Cameron’s 1980s university career. Although his association with the Piers Gaveston Society is disputed, it’s a matter of public record that the prime minister was a member of the Bullingdon Dining Club, an all-male students club roughly analogous to Yale’s Skull and Bones society, whose members often rose to the highest levels of the establishment. The Chancellor of the Exchequer was a member, as was Mayor of London Boris Johnson. A notorious 1987 photo of Cameron, Johnson et al dressed up in foppish black tie and tails helped cement the idea post-2010 that the country was being run by a coterie of feudalist toffs interested only in scratching each other’s backs. Ever since, the image of Cameron as an overgrown Bullingdon Boy lording it over society by gutting the country’s public sector has been regularly conjured up by his critics to the Left. To them, the idea that Dave might have literally sexually abused a dead animal is only confirmation of their worst fears about the man.

So did Cameron go the whole hog, so to speak? Who can tell—though it’s hard to imagine the incident would not have surfaced before, during two election campaigns or even when Black Mirror first screened. If nothing else, Pig-gate can serve as a lesson to left-leaning Brits who suspect Labour leader Jeremy Corbyn is being given a uniquely rough ride by the Fourth Estate. When the press is presented with a story this juicy, not even Cameron can expect to have his bacon saved. 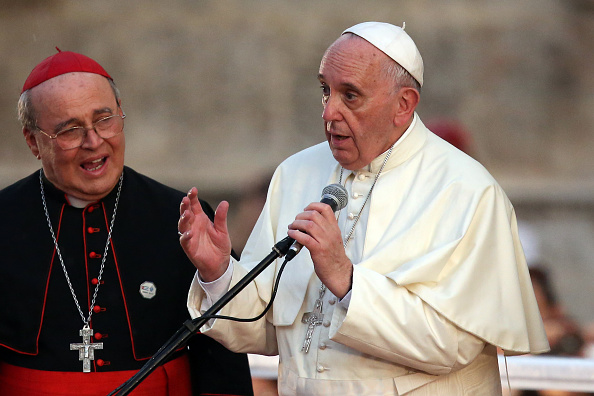 Read the Sermon Pope Francis Gave in Holguín, Cuba
Next Up: Editor's Pick