Migrants wait at a camp for asylum seekers on the Greek island of Lesbos, on Sept. 4, 2015, to receive registration documents from Greek authorities that will allow them to leave the island on ferries and travel onward toward Western Europe.
Yuri Kozyrev—NOOR for TIME
By Karl Vick

So much has been made of the flow of foreign fighters into Syria to join jihadi groups like ISIS that it’s worth pointing out who has been leading the far, far larger flow out of the war zone. Military-aged males are at the forefront of the human torrent flowing into Europe from Syria, a situation that should make us reconsider the actual popularity of war. The vast majority of Muslims are really not that into armed jihad, and for all the attention to the emotional make-up of the young men who take it up, the drama unfolding at Europe’s doorstep lets us consider the ordinary brand of courage summoned by people pushed out of their homes, and then out of their country, by the unspeakable terrors never quite communicated by words like “fighting.”

Placed one atop the other on a map, the number of people moving to join Syria’s civil war would appear as a barely visible black thread in the wide, wide arrow pointing out from the country: 20,000 people going in against 4-million headed out. And while most of the foreign fighters are young men, the same is true of those fleeing the fighting. Many doubtless are escaping conscription into the Syrian armed forces, which President Bashar Assad in a July speech admitted faces major manpower shortages. Almost all are a vanguard for families waiting to follow them. You don’t send a mother or a grandfather to scout a route to a new home. You send the hardiest and least vulnerable—males in their late teens to middle age. The International Organization on Migration, which keeps counts where it can, offers this data point from Macedonia, a stepping stone between Greece and Serbia: Of 81,000 who have arrived there, more than 54,000 are adult males.

Not all are Syrians, but across Europe more and more of them are, a sea change in the conflict. Almost two years ago, when the civil war still had elements of an uprising, young men of military age were more inclined to remain near the fight. At the U.N. refugee camp named Za’atari in Jordan, just across the Syrian border and the Daraa governorate where the first protests against Bashar Assad sprang up, I listened to aid workers fret about how to keep Syrian teenage boys from stealing back over the border to take up arms.

In the 22 months since, another 90,000 people have been killed a conflict now stalemated between Assad’s forces and religious extremists. All told something like 11 million people have been pushed from their homes. The four million who also left the country appear less and less likely to be going back. And the hundreds of thousands with the cash and fortitude to reach Europe are now the face of the conflict.

They’re also it’s true face. There’s plenty of reason to be concerned by the rise of ISIS, and by its ability to attract Westerners who might one day pose a terror threat outside of Syria. But so far the group has inspired only the kind of attacks that, at least in the United States, blend into the background noise of gun violence. A Brookings Institute assessment of the real but possibly overblown danger posed to the West by foreign fighters was appropriately titled Be Afraid. Be a Little Afraid.

The suffering of the war’s civilian victims, on the other hand, is not a matter of informed speculation. It is now, thanks to the tens of thousands of Syrians who have fled for Europe, at the center of the global stage. It came the long way around, but it’s finally there. Welcome. 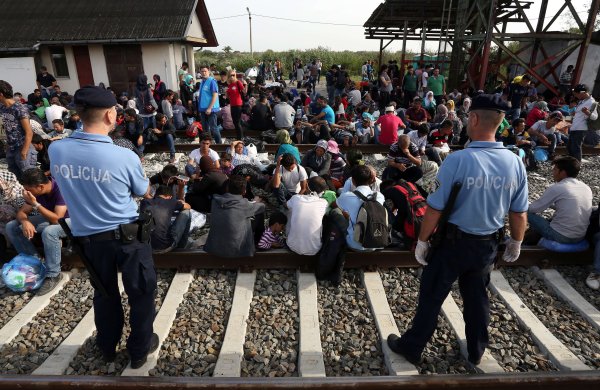 Refugees Turn to Croatia as New Entrance to Europe
Next Up: Editor's Pick