Pope Francis Sits Down with Raúl Castro in Havana

Amid the celebrations and public speeches, the meeting Sunday between Pope Francis and Cuban President Raúl Castro seemed staid by comparison.

The two leaders met at the Palace of the Revolution, the seat of government in Havana, shortly after 4 p.m., each flanked by deputies and other dignitaries.

Castro then introduced his smaller delegation, which included Vice President Miguel Diaz-Canel, who is widely expected to replace him in 2018, Foreign Minister Bruno Rodriguez, who worked on the recent reconciliation with the United States, and Esteban Lazo, president of the Cuban parliament.

After the introductions, the pope and the president left for a one-on-one meeting, while the members of the delegation went into a nearby hall for a separate discussion.

Read Next: Pope Francis Focuses on the Individual in Cuban Mass 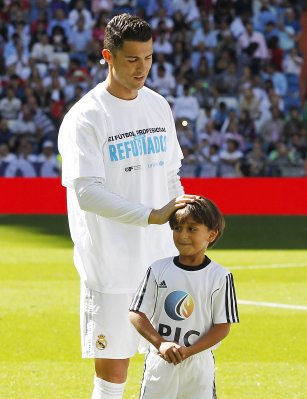 Watch Cristiano Ronaldo Meet the Syrian Boy Tripped By a Camerawoman
Next Up: Editor's Pick