Zaid, son of Osama Abdul Mohsen, the Syrian refugee who was tripped over by a Hungarian journalist, pose with Cristiano Ronaldo of Real Madrid before the La Liga match between Real Madrid CF and Granada CF at Estadio Santiago Bernabeu on Sept. 19, 2015 in Madrid, Spain.
Angel Martinez—Real Madrid/Getty Images
By Justin Worland

It’s rare that Real Madrid soccer star Cristiano Ronaldo gets upstaged, but that’s exactly what happened Saturday when the player walked onto the field before the start of a match with the 7-year-old boy whose father was famously tripped by a camera woman.

For the boy, Zaid Mohsen, the spectacle is far removed the path he and his family followed to escape their native Syria where their home was destroyed. Moshe grinned widely as held the hand of the world’s most popular athlete.

Just weeks ago, the family was one of thousands of Syrians seeking refuge in Europe. Crossing between Serbia and Hungary, the Moshen family encountered a photographer who tripped Osama Abdul Mohsen, Zaid’s father, as he carried the boy. The moment, captured on video, prompted uproar across the world. The woman was fired and Osama was offered a job in Spain. 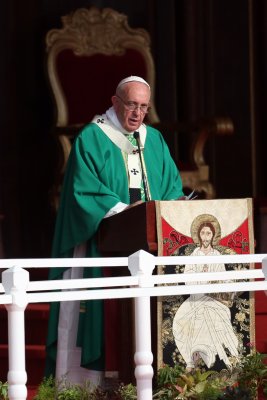 Cubans Make a Pilgrimage to Hear Pope Francis Speak
Next Up: Editor's Pick