Ann Romney: How Mitt and I Coped With the Diagnosis That Changed My Life

Thomas Dunne Books
Ideas
By Ann Romney
Ann Romney is the former first lady of Massachusetts and global ambassador of the Ann Romney Center for Neurologic Diseases at Brigham and Women's Hospital in Boston.

Like most people, I knew little about MS except that it was a very serious progressive disease and that after a long period of suffering it could be fatal. I knew one person who had had it: the mother of one of Craig’s friends. At one point I had invited her to our house to see some work we’d done and she politely explained, “I’d love to see it, but I don’t think I can walk around. It’s a little too much for me.” I’d been surprised. I was aware that she struggled with fatigue, but I didn’t know she lacked the energy to get around the house. When I was given my diagnosis, she was one of the first people I thought about. That’s me, I thought. That’s my future.

The doctor showed us the results of the MRI. I heard only bits and pieces of what he was saying. Something about MS being a disease in which your own immune system attacks the protective sheath covering your nerve fibers. He continued talking about this disease, my disease, but my thoughts were racing in every conceivable direction: What could have caused this? What was going to happen to me? How much time before I felt the full effects of the disease?

Eventually, I asked the only question that really mattered: What is the best treatment and how soon can I begin? If there was a way of fighting this monster, I intended to do it. I wanted my old life back, and I was ready to fight for it.

There is no treatment, he told me.

No treatment? How could that be? There had to be something.

He nodded. Well, there are treatments, he said, but only when your symptoms get worse. Then they would begin treating me with steroids. But it wasn’t time yet, as my symptoms weren’t too bad.

Really? I thought. Not too bad? Try living my life. I can’t do anything; I have no energy, I feel terrible all the time, I’m falling, I’m losing the sensation of touch in my body. I can barely get out of bed in the morning. I don’t open the mail because I don’t have the energy to deal with it. Not too bad? If this is considered not too bad, that means my life is going to get a whole lot more difficult. And I’m supposed to just go home and wait until my symptoms get worse? I was stunned.

Mitt has always been more practical than I. He’s a hands-on person. When something is broken, he fixes it himself. But before he begins, he asks direct, pointed questions and focuses on the details. He likes to learn everything possible, and then figure out what to do. But with each answer he was given, my future seemed bleaker. There was little known about the disease and almost nothing known about how to treat it.

There was one light moment that day. Mitt, looking for some way of reassuring me that we were in this fight together, asked the doctor about intimacy. How does that work, he wondered, and what should we expect? That’s a funny thing, the doctor replied. “I’ve learned that people with MS, they are able to find other ways of expressing their intimacy that can be just as gratifying.” Husbands and wives find their own way, he continued, and then told us the story of one couple who found great satisfaction simply by hooking their pinkies.

Mitt looked at him as if he were crazy.

We’ve been through so much since that moment, but we’ve never forgotten it. In fact, since that day, sometimes when we’re together in a stressful situation we’ll grasp pinkies. No one notices it, but that’s our way of asking each other in public, “Was that good for you, honey?” However, it took us a long time, on a journey with many twists and turns, to get to that place.

Among the many things I’ve learned in those years is that my first reaction to the diagnosis, that I was alone in facing it, was very similar to the response of most people diagnosed with a serious disease or suffering after a devastating injury: This is happening to me. Also, I realized that this was very different from anything I had faced before in my life. Not one of the strategies I had developed and applied throughout my life to deal with personal and family problems was applicable to MS. I was facing a monster, and I had not the slightest idea where to begin.

The only suggestion that doctor made was to give me the contact information for an MS support group. Sign up, he urged. But there was no way I was going to do anything like that. I didn’t intend to sit back and talk about it. I didn’t have the slightest idea where to start or what to do, but simply accepting the inevitable and waiting until my symptoms got bad enough for me to be treated was not an option.

I didn’t panic, at least not immediately. I had been taught by my father, a very successful engineer and inventor, a practical man, that panicking did nothing to help or make things easier. His approach, which I had adopted, was to keep a stiff upper lip and not let anyone else be drawn into this with you. Then figure it out.

From In This Together by Ann Romney. Copyright © 2015 by the author and reprinted by permission of Thomas Dunne Books, an imprint of St. Martin’s Press, LLC. 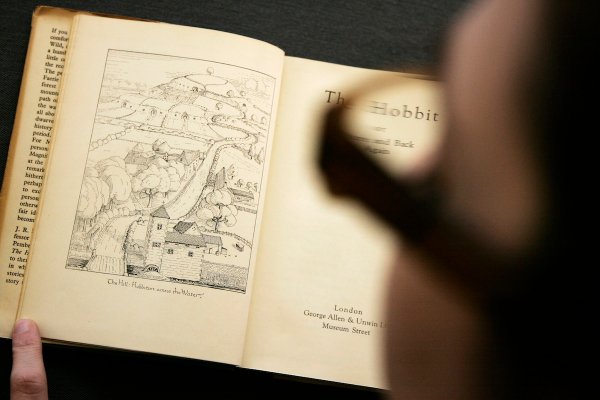 How American College Students Made 'The Hobbit' a Hit
Next Up: Editor's Pick