Season two of Microsoft’s Halo-related Hunt the Truth podcast arrives Tuesday, and with it, the landing path to Halo 5: Guardians on Xbox One is finally visible. If you haven’t yet, have a look at our series overview, which includes an exclusive audio preview of the second season.

I spoke with Halo franchise development director Frank O’Connor, Hunt the Truth creative director Noah Eichen and season two lead Janina Gavankar (reprising her role as rebel operative FERO) about where we’re headed next. Some of that made it into the preview piece. Here’s the rest, lightly edited for clarity and with spoilers if you haven’t listened to season one.

We find out more about Ben straightaway

“The first episode will help you come to terms with what direction Benjamin’s going in,” says O’Connor. “He’s absolutely there for the first episode, and obviously regardless of what happens, his effect on the story is vital, like the things that he achieved and failed to achieve in season one are absolutely what season two is about. Even if he weren’t in it, his actions and his legacy would be the central focus of the story in some ways.”

Season two is partly a meditation on perspective

“I think thematically when we sat down for season two, what kept hitting us was this idea of, guy on the ground versus guy in the tower, and they both have a point,” says Eichen. “The guy on the ground, he may see the human cost of everything, and he’s right there with it. But in the tower, they may think you need to crack a few eggs to save all of humanity. They’re both valid points to some degree, and we play with that a lot in season two, where there’s this idea of perspective, and who’s always right in that situation, it’s never black and white.”

And it scales up quicker

“It gets to that scale of escalation much earlier than season one, largely because a lot of elements of season one’s mystery are now out there for you to think about,” says O’Connor. “Season two gets to the point of the drama and the action much quicker, and part of that is also I think just a confidence in knowing what the story is that we’re telling, whereas with season one there was a lot of experiment and a lot of adjustment in the process. Season two can afford to be much more direct in its storytelling.”

“Every single reporter and voice that’s out there trying to say something has been suppressed for years, for decades,” says Gavankar. “It’s easy to erase people when you’re such a strong force. And I think that we answer some of those questions in season two.”

Unlike season one, season two was completely written before recording

“A lot of the stuff toward the end of season one was very mushy when we started the process, it took us finding that voice to define what it was going to be,” says Eichen. “Season two is very different. Season one, we were writing the whole time, we were literally writing episodes up to the last month. Whereas this time, we wrote it all first, we recorded it in one big chunk. It feels more like it was prepared and we’re telling a very singular story, where first season it felt like we were Ben, and the story was unfolding with us.”

Part of FERO’s persona evolved out of technical necessity

“You cannot speak casually if you’re going to have voice modulation affecting your voice-slash-performance,” says Gavankar, referring to the way her voice was disguised for parts of season one. “If you listen to it, I’m enunciating to the extreme in the first season, and I think it actually affected the character in a really positive way, because she is so succinct in how she handles Ben over the airwaves.”

Mark Hamill got involved simply because he liked the story

“With Mark specifically, that was like a shock to me,” says Eichen. “Because we were trying to cast this character that he plays, and we were reaching out to certain people, and an agent that we were talking to offered him up, saying ‘Would you ever consider Mark Hamill?’ And I was like ‘Yes, yes please.’ I guess Mark listened to season one of the podcast, and we heard back from the agent, and we were like, ‘You know, we don’t have . . . Here’s what we have to offer.’ And the agent said ‘Well, Mark just picks things that he likes, and he loved season one, and he wants to do it, he’s in.’ It was unbelievable.”

And he initially pitched his character with an Eastern European accent

“Mark Hamill came in and he had a very specific idea of who he wanted his character to be,” says Gavankar. “And he presented an Eastern European accident, and Noah had to go in and say ‘There is no Eastern Europe. There is no Europe. Europe’s been gone for a long, long time.'” [Update: Eichen notes that Gavankar may have misunderstood him, that Europe still exists, and that what he meant was “The Halo Universe is set 500 years in the future and cultural lines are much more blurred, we’re not confined by modern interpretations of names and stereotypes.”]

“I’m doing a TV show right now, so I got the script [for season two], and it’s 50 pages at the most for 44 minutes of content,” says Gavankar. “So you read it, and you get a grasp on the entire episode. When you get a movie, it’s about 120 pages, and we all know that one page equals one minute of screen time. This thing was 136 pages.”

“So my stomach just seized up. And I read the entire thing, and it is a brilliant emotional space odyssey that I did not have a lot of time or preproduction to get straight in my head. So doing all of that character work, all of that emotional journey work in like a week is not what actors are used to. And you have to remember, it’s not just the feeling, it’s the recollections of the feeling, and it’s just . . . there were a lot of tears.”

The series was cast with gender-nonspecific roles

“With Hunt the Truth, one of the great things about this experience making season two, is that I’ve been in the trenches with Noah and talking about different characters, ones that weren’t cast yet,” says Gavankar. “And every time that I would bring one up, he’d say ‘Oh, that could be a guy or a girl.’ So it was gender nonspecific. And they’ve drawn a really big line in the sand saying in the future, gender and race will not matter.”

“So this is the future, and one of the most exciting things about people who work in science fiction or futuristic scenes or anything of the sort, is if they are a person who truly doesn’t think in a sexist or racist way, they can make a statement saying it will not matter, it should not matter, and in the stories I make, I will make sure it doesn’t matter. You can represent parts of the future that you want to exist.”

“I believe we have at least one character who’s represented in the game, though not in a meaningful way, more like an Easter egg,” says O’Connor. “In terms of ongoing fiction, absolutely some of these characters are very likely to end up in novels in the next couple of years, and then those novels feed back into our game. We may be having this conversation again in three years and saying yes, those two characters are right in the heart of the game. But not for this one. They’re more like background detail and a perspective shift.”

“The events, on the other hand, happen both simultaneously and preceding the game. So you’ll see real crossover, and big meaningful events that aren’t just subterfuge and spying. There’s some big world-changing things that happen that affect both our game and the Hunt the Truth podcast.”

“We’ve already taken elements that were sort of agreed upon premises from Hunt the Truth one and two, and there will be some knock on effects that happen even in our next Halo game,” says O’Connor. “So there’s definitely connections with Halo 5, but it’s also tied to plot elements that will be part of the universe following Halo 5. All of this stuff just feeds into our real history, and stuff that we continue to use.”

“I’m almost positive we’re going to do something again, both with the character and scenarios of Hunt the Truth, and with that format. We just don’t know what those things are yet.” 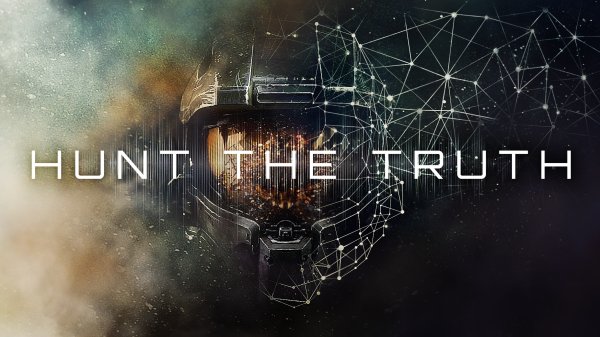 An Exclusive Sneak Peak No Halo Fan Should Miss
Next Up: Editor's Pick