Pope Francis Focuses on the Individual in Cuban Mass

Early Sunday morning, hundreds of thousands of Cubans gathered in the Plaza de la Revolución in the dark, waiting for Pope Francis. A pink sun rose slowly behind tall, gray concrete buildings, one draped with a giant Cuban flag. Che Guevara, the famed Argentinian of the Cuban Revolution, looked out over the enormous square glowing mural, watching the masses—and the Pope’s mass.

This has been a place of Fidel Castro’s political rallies. It is also the spot where Pope John Paul II delivered his famous homily 17 years ago, when as the first pope to visit the island, he called the church to continue to set before the world, “a new justice.” His words sound familiar in a Francis papacy where critique of capitalism has become almost commonplace. “Various places are witnessing the resurgence of a certain capitalist neoliberalism which subordinates the human person to blind market forces and conditions the development of peoples on those forces,” he preached.

“At times unsustainable economic programs are imposed on nations a condition for further assistance,” John Paul II continued. “In the international community we thus see a small number of countries growing exceedingly rich at the cost of the increasing impoverishment of a great number of other countries; as a result the wealthy grow ever wealthier, while the poor grow ever poorer.”

This Sunday however, Francis focused less on nations and more on individuals. He began with a question Jesus asked his disciples at the Last Supper: Who is the most important: The one who serves or the one who is served? “The disciples were arguing about who would have the highest place, who would be chosen for privileges, who would be above the common law,” Francis said. “Jesus upsets their logic, their mindset, by simply telling them that life is lived authentically in a concrete commitment to our neighbor.”

It was a reminder to individual Cubans to consider their own vocations, the Catholic term for a divine call to service. And yet Francis warned that they should not take the idea too far. Serving others, he argued, does not mean suppressing oneself, nor does it mean trying too hard to impress others with your sacrifice, a type of service that is ultimately self-serving.

“All of us are called by virtue of our Christian vocation to that service which truly serves, and to help one another not to be tempted by a ‘service’ which is really ‘self-serving,'” he said. “All of us are asked, indeed urged, by Jesus to care for one another out of love. … Jesus tells us: Whoever would be first among you must be the last, and the servant of all.’ He does not say: if your neighbor wants to be first, let him be the servant!”

Francis also praised the Cuban people, arguing that belonging to a community is important. “God’s holy and faithful people in Cuba is a people with a taste for parties, for friendship, for beautiful things. It is a people which marches with songs of praise. It is a people which has its wounds, like every other people, yet knows how to stand up with open arms, to keep walking in hope, because it has a vocation of grandeur,” he said.

On the eve of Pope Francis’ historic trip to the United States, where many wonder how far he will go in his critique of capitalism, Francis showed that he can critique communism too, and the Catholic Church can provide a corrective to both. The mass was at heart, a Sunday sermon and not a political address, and as such was aimed at the individual worshippers in the pews and their relationship with the divine. But there was a political undercurrent in that focus, an argument for individuality in a nation built around a philosophy of collective action.

“Service is never ideological, for we do not serve ideas, we serve people,” Francis preached to an audience that included Cuban President Raúl Castro and Argentinian President Cristina Kirchner. Later, he finished with that theme: “Let us not forget the Good News we have heard today: the importance of a people, a nation and the importance of individuals, which is always based on how they seek to serve their vulnerable brothers and sisters.”

Cardinal Jaime Lucas Ortega y Alamino of Havana also spoke at the end of the mass, and he thanked the Pope for his work in renewing relations between Cuba and the U.S. He said he hoped that the peace would extend not just to the political activities, but to all Cubans, including those who live in the U.S. 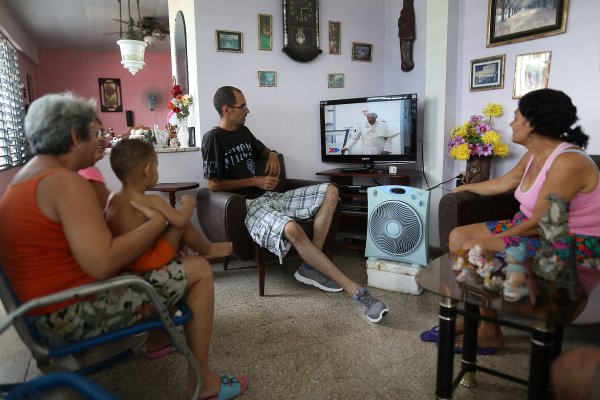 Cubans Ready to Meet a Different Kind of Pope
Next Up: Editor's Pick