Pope Francis waves to reporters at Fiumicino international airport as he boards his flight to Havana, Cuba, from Rome, on Sept. 19, 2015.
TELENEWS/EPA
By Elizabeth Dias / Havana

Pope Francis’ arrival in Cuba was filled with pomp and politics, as both the Catholic leader and Cuban President Raúl Castro looked to highlight their causes in the highly visible meeting.

The pope stepped off an Alitalia chartered jet onto a red carpet on the tarmac at the Havana airport, where he was greeted by Castro. Speaking first, the president noted with pride the accomplishments of the Cuban educational and health systems, arguing that they help address poverty and inequality, two concerns of the pope.

He then turned to politics, criticizing the United States for continuing an economic embargo and running a prison in Guantanamo Bay.

“The blockade, which causes human damages and privation to the Cuvban family, is cruel, immoral and illegal and it should cease,” Castro said. “The territory usurped by the Guantanamo naval base should be returned to Cuba and other issues resolved too.”

Although President Obama has sought to relax the embargo rules as Cuba and the U.S. have begun to normalize relations, it will remain in place until Congress acts, which is unlikely as long as Republicans are in control. Similarly, Obama has reduced the number of prisoners held at Guantanamo but it likely won’t close without congressional approval.

When it was his turn to speak, Pope Francis told Castro to “convey my sentiments of particular respect and consideration to your brother Fidel,” according to prepared remarks. He then spoke happily of the normalizing of relations between the U.S. and Cuba, in which the Vatican played a role.

“It is a sign of victory of the culture of encounter and dialogue, ‘the system of universal growth’ over ‘the forever dead system of groups and dynasties,’” he said, according to prepared remarks. “I urge political leaders to persevere on this path and to develop all potentialities as a proof of the high service which they are called to carry out on behalf of the peace and wellbeing of their peoples, of all America as an example of reconciliation for the entire world,” he said.

Francis was flanked by Cardinal Jaime Ortega y Alamino of Havana. one of his close advisors and a key player in the reconciliation with the United States.

Clouds rolled in around the airport, with occasional thunderclaps punctuating the welcoming ceremony. As Pope Francis got into an open popemobile to wave to the thousands of Cuban families lining the fences around the airport, a light sprinkle of rain began to fall. 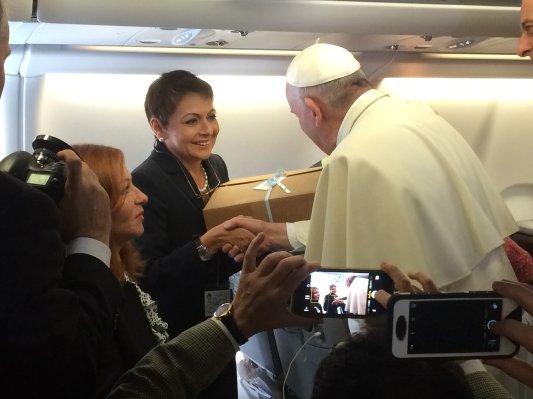 Pope Francis Surprised with Empanadas on Flight to Cuba
Next Up: Editor's Pick