Pope Francis waves to reporters at Fiumicino international airport as he boards his flight to Havana, Cuba, from Rome, on Sept. 19, 2015.
TELENEWS/EPA
By Elizabeth Dias

Pope Francis has had a big week, and he is just getting started. A Syrian family of four moved into the Vatican, thanks to the Pope’s decision that all parishes in Europe should house a refugee family. He addressed the Vatican Observatory Symposium and named an American Jesuit as his head astronomer. He urged greater care for women and children who live on the street.

Now on Saturday, the Pope is headed to Havana to begin the tenth and longest trip of his papacy—to Cuba, the United States and the United Nations.

For Francis, Cuba is not just a stopover visit en route to Washington. If anything it is even more significant because he decided to add it to his United States itinerary just several months ago. He will become only the third pontiff to visit the island nation, all in recent times; John Paul II visited 1998 and Benedict XVI visited in 2012. Cardinal Jaime Ortega y Alamino of Havana—one of Francis’ close advisors and his personal emissary who secretly helped to broker the reconciliation between Cuba and the United States in 2014—will become the only Cardinal to receive three different Popes.

The Cuba portion is short, but packed. Pope Francis will land in Havana on Saturday night. He will host mass in the Plaza de la Revolución on Sunday morning, the same place that John Paul II held his historic mass in 1998, and that afternoon, he is slated to meet President Raul Castro. A meeting with Fidel Castro is likely at some point.

Later, Pope Francis will meet with priests and seminarians and then greet young people. The next morning he goes to Holguín, the site where Christopher Columbus landed in 1492, where Francis plans to celebrate mass and bless the city. That same evening he heads to Santiago de Cuba, not far from Guantanamo Bay, where he will meet the bishops. Tuesday morning he will have mass at the shrine of the Virgin and meet with families. From there, it is wheels up to Washington. He may or may not have a press conference en route.

The Catholic Church in the U.S. will also be represented in Cuba during the trip. Cardinal Sean O’Malley, one of Pope Francis’ close advisors, is there for the visit along with a group of pilgrims. Archbishop Thomas Wenski of Miami, a diocese that has often been at the center of Cuban-Vatican-US relations, is doing the same.

As always with Francis, this trip will be surprises, and they will likely turn out to be some of the most interesting moments. Just as he has never been to the U.S., he has also never spent time in Cuba, save for an hour changing planes at the airport. Will he meet with the “Damas de Blanco,” the “Ladies in White,” who represent the mothers and wives of political prisoners in Cuba? Will he leave an object at the shrine of the Virgin at El Cobre? How might he continue to address more politics of Latin and South America?

Not everyone feels that the Pope has been hard enough on the island, especially during the rapprochement with the U.S. This week the Cuban government announced the release of some 3,500 prisoners, but they were not the political prisoners.

“There doesn’t seem to have seem any concessions made by Cuba, or any apologies,” former U.S. ambassador to the Holy See Jim Nicholson, who served under President George W. Bush and Pope John Paul II, told TIME in August. “It baffles me though that we haven’t seen, not only haven’t seen any concessions or gestures on the part of Cuba, we’ve seen the Pope entertain Castro in Rome and allowing him to be the court jester of the moment without any real commitment to the church or the people in this country that the church cares about so much.”

Read Next: Quiz: How Well Do You Know Pope Francis? 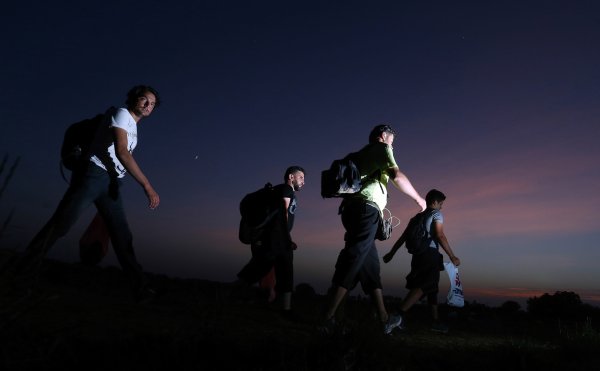 Refugees Squeeze Through Crack in Croatia's Border
Next Up: Editor's Pick