Pope Francis' Newest Saint May Not Last at U.S. Capitol

Though Pope Francis will soon formalize Junípero Serra’s status as a saint in the Catholic Church, the California friar’s place in the U.S. Capitol is less secure.

A bronze statue of Serra currently stands in the National Statuary Hall, south of the Capitol Rotunda, where the pope will speak Thursday. The statue, one of two chosen by California to represents its history and culture, recognizes the Spanish-born friar who started nine missions in the 19th century.

But while Francis will canonize Serra Wednesday, there is a movement afoot to replace the statue of him in the Capitol with one of astronaut Sally Ride, the first American woman in space.

The House of Representatives started the Statuary Hall Collection in 1864, so that states could commemorate two of their own citizens within the Capitol. By 1933, the burden of only 65 out of 100 possible statues was already too much for the Hall, as the structure would not support all the weight. Congress decided to limit the states to one statue in the Hall each.

Read More: This Is the California Friar the Pope Is About to Canonize

The steps for replacing a statue in the Hall are complex, but any proposal first requires approval from the state legislature and governor. Architect of the Capitol spokesperson Laura Condeluci told TIME in an email that six states to date have decided to change their statues, all since 2003.

Earlier this year, California State Sen. Ricardo Lara proposed a measure to swap out Serra’s figure with a statue of Ride. Ride would also be the first statue of a gay or lesbian in the hall. Many Native Americans in California, who disapprove of Serra’s treatment of indigenous people, support the measure and are protesting the Pope’s canonization of Serra.

California Gov. Jerry Brown, however, does not agree with the change.

“Tragedy and good and evil often inhere in the same situation,” he said in response to the outcry in January. “And that doesn’t mean we won’t have our saints. It’s just that we have to understand that saints, like everybody else, are not perfect.”

The measure passed the State Senate, but Lara requested to postpone a vote in the other chamber until after the Pope’s visit. An assemblyman and state senator said in a June statement that debating the bill before Francis’ visit “would have conveyed a terrible message to him and millions of Catholics around the world.”

In the meantime, Brown said during a July visit to Rome that Serra’s statue would remain in the Hall “until the end of time.” 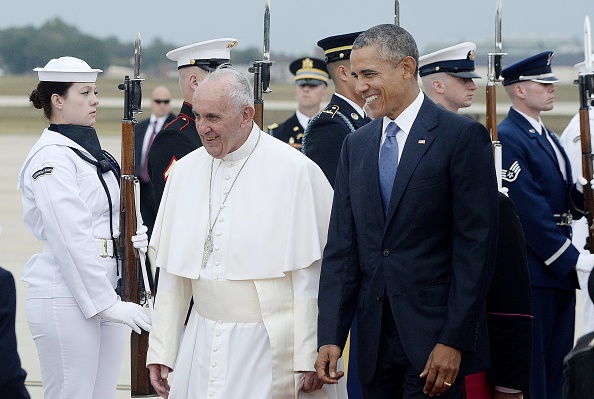 The Song Everyone Is Playing for the Pope
Next Up: Editor's Pick