Microsoft Office for the iPad Is (Finally) Here

It’s been the subject of speculation and rumor for years. And now, at long last, Microsoft Office for the iPad is a product. Its arrival was among the news items at a press conference in San Francisco this morning about Microsoft’s cloud and mobile strategy, presided over by new CEO Satya Nadella, in his first public appearance since his appointment to replace Steve Ballmer.

The new Office apps for the iPad, which are available starting at 2PM ET today, include the suite’s core triumvirate: Word, Excel and PowerPoint. (Another Office mainstay, the OneNote note-taker, is already available in a free iPad edition.) As you’d guess, they’re not feature-complete replicas of the versions from Office’s flagship Windows version. But they do look like they’re considerably richer than the minimum viable versions would be. Word, for instance, lets you edit charts in place and do collaborative editing, complete with redlined changes and threaded comments. The interface is reminiscent of other versions of Office, with the Ribbon formatting bar up top, but Microsoft says it’s been rethought to be touch-friendly. And as with other versions of Office, everything is saved by default to OneDrive (formerly SkyDrive), Microsoft’s online storage service.

Like the existing versions of Office for the iPhone and Android, the iPad one isn’t available for stand-alone purchase. Instead, it’s free if all you want to do is view files and display PowerPoint presentations. If you want to create and edit documents, you’ll need to subscribe to Microsoft’s Office 365 service, which bundles Office’s Windows version with other variants for a yearly cost that starts at $70. That positions Office for the iPad as a complement to the Windows version rather than a potential replacement, and removes it from direct competition with existing iPad suites, such Apple’s iWork apps: Pages, Numbers and Keynote.

For a long time, the conventional wisdom about Office for the iPad — held by me, among others — was that Microsoft was unlikely to release it before it offered a version of Office designed for Windows 8’s newfangled, touch-centric “Metro” interface. That turned out not to be the case. Microsoft has already acknowledged that it’s working on a new-interface version of Office for Windows — and provided a glimpse at an early version — but it went unmentioned at today’s event.

Is there anything game-changing about Office finally arriving on the iPad? Doesn’t look like it. Folks who want to do word processing, spreadsheets and presentations on an iPad already have several good options. But judging from the demo, Microsoft’s apps do look ambitious and capable. And the single biggest benefit of a real version of Office being available might be file compatibility: Documents which were created in Office on a PC sometimes get their formatting mangled when they make the trip to and from an alternative iPad app.

More thoughts once I get a chance to try the new apps for myself. In the meantime, here are the links to each app in the App Store: 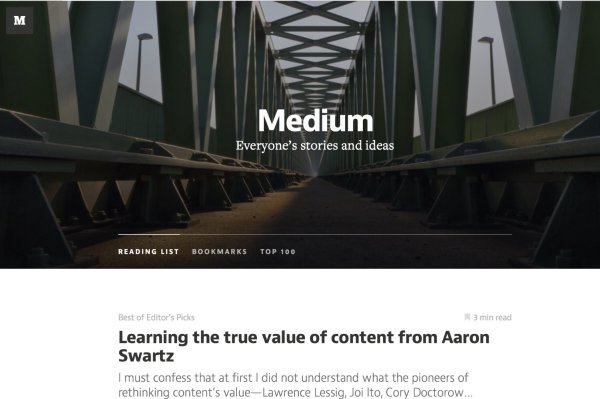 What Is Medium? Medium Is Pretty Cool, That's What
Next Up: Editor's Pick