In Abdel Fatah Al-Sisi’s dream, approximately 35 years ago, he chatted with late Egyptian president Anwar Sadat. The two men exchanged pleasantries and Sadat told Sisi he always knew he was destined to lead Egypt. Sisi replied, “I also know that I’m going to be president of the republic.”

Sisi discussed his prophetic presidential dreams during an off-the-record digression in a newspaper interview last year; audio of that portion was leaked last December. Such revelations in just about any other democratic country would have doomed the career of any politician. But Sisi is no ordinary politician and supporters here say the leaks may actually have helped Sisi and burnished his credentials as a child of destiny.

Sisi’s long-awaited entry into Egypt’s upcoming presidential race caps a dizzying rise to prominence. Just two years ago, Sisi was a political unknown plucked from comparative obscurity in August 2012 and elevated to defense minister by then-President Mohammed Morsi. Within a year Sisi had ousted Morsi from power in the face of massive street protests. Shortly thereafter, Sisi-mania was in full swing.

The country has been waiting for Sisi to announce his intentions for months. He enters the race as the overwhelmingly frontrunner—beneficiary of an intense cult-of-personality that is in part manufactured, but also taps into genuine popular support for a military strongman. Posters of Sisi’s face have blanketed the country for months and a host of political and religious leaders have been lining up to endorse him. In January, pro-military demonstrators in Tahrir Square wore Pharaoh-style gold Sisi masks with no apparent sense of irony about what such symbolism portends for the country’s fledgling democracy.

“There is nobody today who has the popularity of this man. That is a fact,” says Amr Badr, a prominent local businessman with close ties to the military and an active supporter of Sisi’s presidential goals. “I am convinced that Egypt needs a strong popular president with a great deal of respect.”
Egypt is no stranger to media-inflated cults of personality. But the sheer intensity of the Sisi worship is somewhat curious given that Egyptians still know very little about the man beyond the bare biographic details.

“He’s basically this mystery man. Despite the cult of personality, we don’t know that much about him,” says Issandr El Amrani, North Africa director for International Crisis Group and a longtime Egypt resident. “Obviously he benefits from the love of the military. But beyond that we know very little of Sisi and his personality, temperament and beliefs.”

Joshua Stacher, formerly based in Egypt and now an assistant professor of political science at Kent State University, offers a harsher assessment. “He doesn’t seem to have a political plan. He doesn’t seem to have an economic plan. The only thing we’ve seen him do for the past eight months is launch a war on terror and repress dissent,” says Stacher, author of the book Adaptable Autocrats: Regime Power in Egypt and Syria.

Badr, the businessman and Sisi supporter, says the former Defense Minister’s personal charisma and communication-style are as much the source of his popularity as his connection to the military. “He is seen as one of the people. He’s not an elitist and he has very good body language,” Badr says. “He’s very simple—in a good way. He doesn’t use sophisticated language.”

Wednesday night’s announcement—delivered in full uniform from what looked like a lush garden—was Sisi’s first real address to the Egyptian people since his announcement of Morsi’s ouster last July. “This is my last day as a soldier,” he said, “But I will battle every day for the sake of Egypt.”

He spoke calmly and softly, like a father seeking to reassure a frightened child, and, like JFK-on-the-Nile, repeatedly emphasized the responsibility citizens bear for the well-being of their country. “Building the future is a communal effort,” he said, then repeated the line a second time for emphasis.
Sisi also took pains to point out that despite the likelihood of Egypt being led by yet another military man, this was not a return to the days of Hosni Mubarak. No man could lead Egypt, “without the support of the people…those days are over,” he said.

Now begins the real test. As Sisi sheds his uniform and enters the muck of the political arena, can he maintain the Teflon coating that has shielded him so far even as Egypt’s post-coup government has struggled in the face of mounting criticism? Prime Minister Hazem Beblawy resigned his post last month in the face of widespread criticism over the government’s performance and a wave of labor strikes.

Sisi’s military faced its own embarrassing scandal earlier this year when it backed and promoted a fringe doctor who claimed to have invented a device that cures both AIDS and Hepatitis C. The doctor was granted an honorary military rank and his press conference was sponsored by the army. The issue was hushed up in the face of international mockery, but Sisi seems to have somehow escaped personal blame for the scandal.

The upcoming campaign season will be short and intense. An exact date has not been announced yet, but the vote is expected to take place within about six weeks. Hamdeen Sabbahi, a leftist candidate who finished a surprisingly strong 3rd place in the 2012 presidential elections, is the only serious contender who has declared his candidacy. Other potential contenders such as 4th place 2012 finisher Abdel Moneim Aboul Fotouh have announced plans to sit out the race. Aboul Fotouh claimed it was because the proceedings would be “a farce,” but Badr, the Sisi supporter, theorized that Aboul Fotouh and other potential contenders “are simply hiding from defeat” in the face of Sisi’s popularity.

The Muslim Brotherhood is also sitting this race out: the Islamist organization and its affiliated Freedom and Justice Party have both been banned. After the election season begins, Egyptian police and courts continue to harshly purge the Brotherhood from public and political life. The organization has been declared a terrorist group, mere membership has been criminalized and a southern Egyptian judge recently sentenced more than 500 alleged Brotherhood members to death in a trial that lasted exactly two sessions.

“We’re not in this just to give legitimacy to someone else,” says a member of Sabbahi’s campaign team, speaking on condition of anonymity because he wasn’t officially authorized to speak to the media. Nevertheless, Sisi’s ascension to the presidency is widely regarded as a foregone conclusion. However his campaign—backed by a heavily biased national media—will be pushing hard to make sure their man wins by a wide an unassailable margin.
Badr says Sisi absolutely needs to win by far more than the 51% which produced the Morsi presidency in order to claim a true mandate to govern.
“Even 54% is still not good. We need a president who can draw 60% of the vote,” he says. “That would be perfect for Egypt. That would produce a president who can make the tough decisions.” 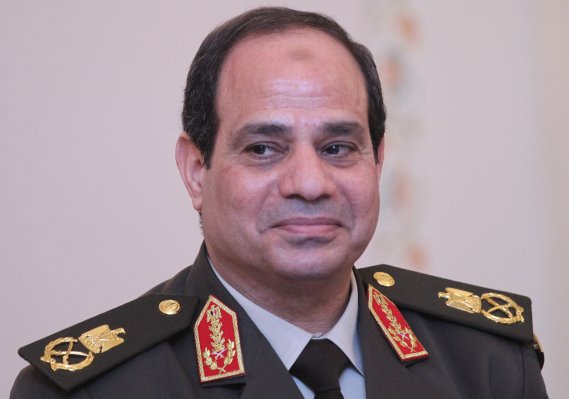 Egyptian Army Chief: I Want to Be President
Next Up: Editor's Pick