CJ Pearson, a 13-year-old, has become an overnight sensation online for a video criticizing President Barack Obama for inviting clock-making high school student Ahmed Mohamed to the White House. But the conservative teen from Georgia is not new to the political spotlight.

Pearson first made waves among conservative media in February with his YouTube video, “President Obama: Do you really love America?” in which the middle school student with a southern twang questions the President’s response to terrorism. The video has been watched more than 2 million times.

“Before posting my first video, I literally rolled out of bed and spoke directly to the camera about my firm belief that this President does indeed not love America,” Pearson told TIME by email. “After the success of my first video, I decided I’d keep [posting] videos and keep speaking up about the issues that I felt were important. I wanted to be a voice for my generation.”

In his newest video, “Dear Mr. President and Ahmed,” Pearson says Obama used Mohamed, a Muslim high school student, as a tool for his own agenda, and criticized the President for not extending White House invitations to the families of slain police officers or Kathryn Steinle, a San Francisco shooting victim.

“Mr. President, what are your priorities here?” he asked during the monologue. “Because in all honesty, I think you’re being ignorant, I think you’re incompetent, and I think you don’t understand reality.” Pearson received media attention for his sharp tongue, along with both praise and pushback online. He acknowledged that there has been “some negativity,” but said the outpouring of support he has received from conservatives has been “truly humbling.”

Even before his latest video gained national attention, Pearson had been featured on Fox & Friends, The Washington Times, Newsmax and USA Today — all before high school. “I’ve always been told that if you’re not receiving pushback, you’re not pushing hard enough,” Pearson told Fox in July.

The fledgling YouTube star, whose channel has received more than 3 million views since he joined in February, gravitates toward hot-button political issues. The titles of his video posts include: “CJ Pearson DESTROYS Common Core,” “Hillary Clinton for Narcissist In Chief!” and “Sorry, Islam. You’re not taking away my liberty!”

Pearson isn’t only interested in punditry; he’s been involved in a number of campaigns, and Texas Sen. Ted Cruz, who is running for the Republican presidential nomination, named him the national chairman of the “Teens for Ted” coalition on Sept. 8.

“CJ Pearson commands a brand, following, and political message that inspires the youngest of followers to even an older generation of conservatives,” said the statement announcing Pearson’s leadership. Pearson says he will do “whatever it takes” to secure the youth vote for Cruz, whom he calls a “once in a lifetime candidate.”

The teen from Grovetown, Georgia has already served as student body president of Columbia Middle School, where he’s currently in the eighth grade. He said his county is very conservative, so many of his classmates share his views; but he sill usually tries to talk about “normal thirteen year old things.”

Pearson said his parents are Democrats, who “virtually disagree with everything” he says, but they support his efforts to be involved with politics. “Discussion is tense, yet respectful,” Pearson added. “They have their views. I have mine.”

When TIME asked whether he aspires to be Commander in Chief one day, Pearson was unequivocal.

“I definitely do,” he wrote, “and like Donald Trump, I can assure you whatever I do as President will be ‘YUGEEE!’ haha.” 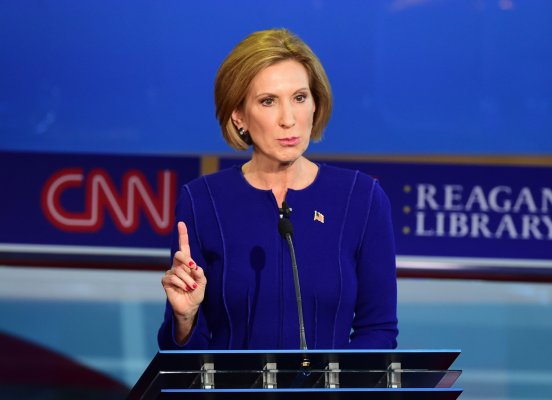 Only a Woman Could Slow Donald Trump
Next Up: Editor's Pick