Desperate Refugees Turn to Croatia as Their New Entrance to Europe

Migrants wait for a train at a railway station, near the official border between Serbia and Croatia, near Eastern-Croatian town of Tovarnik, on Sept. 17, 2015.
AFP/Getty Images
By Rebecca Collard

ON THE SID-TOVARNIK BORDER CROSSING BETWEEN SERBIA AND CROATIA: Hundreds of refugees pile out of buses near the Serbian-Croatian border. Others arrive by taxi, if they can afford it. “Just 100 meters this way and then left. Then 2 kilometers,” barks a Serbian Red Cross worker at a crowd of confused refugees as they get off the bus.

Mahmoud Suleiman, from Aleppo, Syria, just crossed into Serbia from Macedonia last night. “My friend called me from the border with Hungary and said it was closed,” says Suleiman. He says a bus arrived this morning near the border where he entered Serbia and picked him and 50 others up. “They brought us directly to here.”

From here they walk down a dirt road through cornfields to reach the border with Croatia. On Wednesday buses and taxis began to ferry people from Serbia’s border with Hungary in the north and Macedonia in the south, to its borders with Croatia. Those coming from the south said they paid about $40 for a ride to the Croatian border, and may refugees reported that the police directed them to the buses.

Thousands have arrived here at the Sid-Tovarnik crossing on the Serbian-Croatian border. Aid workers say the flow of migrants continued through the night. According to Croatia’s state run news agency, a total of 8,900 people crossed into Croatia from Serbia over the last 24 hours, since the country said it would allow free passage through its territory.

It may not last. By Thursday afternoon, Croatia already said it could no longer take in any more refugees. “Croatia will not be able to receive more people,” Interior Minister Ranko Ostojic told reporters in the border town of Tovarnik.

Thousands of refugees stormed the train station in Tovarnik,. pushing their way past lines of police in an attempt to board trains to the Croatian capital of Zagreb. Eventually, buses were sent in to move people out.

Croatia, the European Union’s newest member, had seemed to promise unrestricted passage for refugees, before backtracking, transporting people to camps near Zagreb and insisting they must register before heading on.

It’s unclear whether registration in Croatia will prohibit these people from making asylum claims in other countries. The Dublin Regulations state that refugees must apply for asylum in the first E.U. country they enter, but in recent weeks Germany has been effectively ignoring those rules.

But though Croatia is part of the E.U., it is not a member of the Schengen border-free zone, which includes countries that allow free passage between their borders. Neighboring Slovenia is in Schengen, however, and it seems that many refugees are heading towards that country’s borders instead, in an effort to eventually reach more promising destinations like Germany.

That may not work—Slovenia is taking a Hungary-like approach, insisting asylum seekers must register, or they will be considered illegal infiltrators, though as of yet don’t have plans to physically block their entry. The Slovenian government says those that are deemed refugees will be allowed to stay, others will be sent back.

But refugees, most of who have their sights set on Germany or other western European states are unlikely to want to register in Croatia or Slovenia. “If we go to Slovenia do we have to stamp?” asks Wagdy Najm Abod, making the motion of putting his thumb on an ink pad. He’s traveling with wife and two small children. They are from the Iraqi province of Anbar where intense fighting continues between militants from the Islamic State of Iraq and Syria (ISIS) and Iraqi national forces and allied groups. “We want to go to Finland.”

Near the border, the arrival of buses is almost constant. As the sun sets, a double-decker bus pulls up and more people take the dirt road into the corn fields. Croatia says it is expecting 20,000 more arrivals in the next two weeks, but those estimates are likely low considering the numbers arriving every day on the shores of Greece.

“None of these people want to stay in these countries,” said Dusan Aralica a protection officers with the UN refuge agency at the drop point near the border. “We just hope Croatia will keep the border open.” 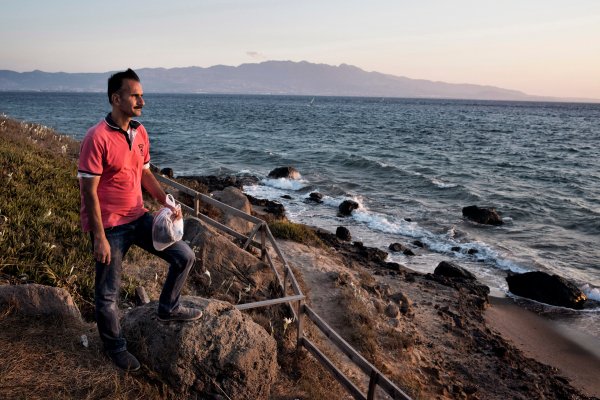 The Syrian Refugee Who Wants to Swim to Salvation in Europe
Next Up: Editor's Pick