Ideas
By Gil Troy
Troy is a professor of history at McGill University and the author of The Age of Clinton: America in the 1990s.

If Carly Fiorina ends up on the Republican ticket, her stellar performance at the Reagan Library will become a new American political legend. Her one-liners will rank with Lloyd Bentsen’s “You’re no Jack Kennedy” putdown of Dan Quayle. Her stunning debut may even rank with William Jennings Bryan’s 1896 Cross of Gold Speech and Barack Obama’s no Red America, no Blue America, 2004 Democratic convention keynote.

Fiorina had three big challenges on Wednesday night. First, she had to justify her presence on CNN’s mainstage, having lobbied her way off the “kid’s table” for second-tier candidates. Next, she had to respond to Donald Trump’s ugly comment about her looks effectively but elegantly, looking neither bullied nor bullying. Finally, she had to showcase her talents and tell her story, taking advantage of the Attention Deficit Disorder media’s fleeting focus on her.

In some ways, simply by showing up, Fiorina justified her presence. For a party that struggles with its image as an Angry White Male Encounter Group, in a year when millions demand a female president, having a woman standing amid ten men in business suits diversified the Republican Party. And her Only in America story, “from secretary to CEO,” toasted the American dream so many Americans now fear is imperiled, illustrating her vow “to lead the resurgence of this great nation.”

Harder for Fiorina was figuring how to respond to Donald Trump’s Rolling Stone insult: “Look at that face. Would anyone vote for that?” The dark arts of the counterattack are tricky for all politicians, perhaps especially women. If you howl, you get tagged as an angry, thin-skinned feminist; if you whine, you appear weak.

In 1984, the first female Vice Presidential candidate Geraldine Ferraro faced a similar pickle. Her Republican rival, Vice President George H.W. Bush, often swaggered, compensating for his own fears about being called wimpy. When the debate turned to Middle East issues, Bush interjected condescendingly, “Let me help you with the difference, Mrs. Ferraro, between Iran and the embassy in Lebanon.” Congresswoman Ferraro, a tough Queens pol who had been enduring Bush’s haughtiness all night, snapped: “Let me just say, first of all, that I almost resent, Vice President Bush, your patronizing attitude that you have to teach me about foreign policy.” With that pushback, many believed, Ferraro triumphed.

Sixteen years later, when Hillary Clinton ran for Senate, her opponent Rick Lazio interrupted her to stride across the stage, waving a campaign finance pledge for her to sign. Clinton held her ground without theatrics—then let her spinmeisters brutalize Lazio as sexist and “menacing.”

Fiorina mimicked Clinton’s queenly discipline more than Ferraro’s Queens counterpunch. First, she refused to answer whether she felt comfortable with Trump’s finger on the button, trusting Americans’ “common sense and good judgment.” Then, when asked about Trump’s insult, she responded Zen-like, pooh-poohing Trump’s backpedaling by saying, “I think women all over this country heard very clearly what Mr. Trump said.” The Donald squirmed as the audience roared.

Fiorina’s kept hitting her mark. She roiled the base with her vivid attack on Planned Parenthood and abortion. She identified herself with the surge of outsiders enjoying popularity by noting that most Americans “think the government is corrupt,” and that non-politicians like herself can “challenge the status quo.” She demonstrated foreign policy muscle by blasting Iran and simply saying, “having met Vladimir Putin, I wouldn’t talk to him,” but “I would … begin rebuilding the Sixth Fleet.”

As an added bonus, she auditioned for the role of Hillary-conqueror, launching two devastating one-liners, saying “unlike Mrs. Clinton, I know flying is an activity, not an accomplishment” and “If you want to stump a Democrat, ask them to name a[n] accomplishment of Mrs. Clinton’s.” She framed her candidacy as post-feminist, denouncing empty gestures like putting a woman on the ten dollar bill, while proclaiming, “Women are not a special interest group. Women are the majority of this nation.”

Although political scientists like to call this period the “Invisible Primary,” this is more like the campaign’s Silly Season, when celebrity and self-puffery trump substance and policy, boosting novelty acts like Howard Dean and Herman Cain – remember them? With this debate, Carly Fiorina showed she is poised, smart, colorful, pointed, and ready for prime time. Whether she can turn those assets into a nomination remains to be seen. But this secretary-to-CEO, second-tier candidate but first-rate campaigner may be Republicans’ best proof that the GOP is the Grand Old Party, hip, smart, and open to all, and not the Graying Old man’s Party.

Gil Troy’s eleventh book, The Age of Clinton: America in the 1990s, will be published October 6 by Thomas Dunne Books of St. Martin’s Press. A professor of history at McGill University, he is a Visiting Scholar this fall at the Brookings Institution. 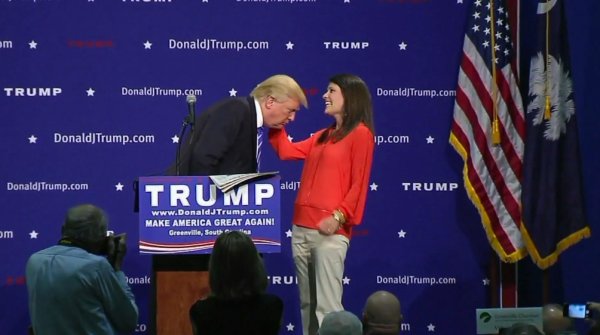 Watch Donald Trump Try to Prove His Hair Is Real
Next Up: Editor's Pick