How to Make Donald Trump Disappear

We now know how to make Donald Trump disappear: talk policy. He simply has nothing useful to say. He’ll deal with it when the time comes. He’ll hash out Syria with Putin. He’ll hire people. “Killers,” no doubt, as he likes to say. He’ll call Carl Icahn. Carl Icahn? And we now know that Trump will almost certainly lose altitude: his boorishness will grow old, his insults increasingly desperate.

The second Republican presidential debate was weird, bifurcated and schizoid. There were two debates–and I’m not referring to the earlier, runner-up show, which was dominated by Lindsey Graham’s bonhomie. One of the debates was about Trump’s insults–and this prevailed early on. It was CNN’s obvious strategy to generate heat by asking each of the candidates to respond to the naughty things that Trump had said about them. Carly Fiorina handled this best, especially when she said “every woman in America” knew what Trump was talking about when he said, “look at that [her] face.” This was the most direct path to controversy and entertainment value. But as Rand Paul—who had a very good night—pointed out, it was playground stuff. And gradually, an actual debate about actual issues—mostly foreign policy—broke out. To my mind, Marco Rubio won that debate with his obvious fluency on a range of topics.

But what do I know? I still, for the life of me, can’t figure out the appeal of Ben Carson—as a human being, yes; as a presidential candidate, oh please. And I don’t see American politics through a lens of blind anger, as the Republican base seems to do. So I have no clue about who Republicans will think won this.

A few notes on the individual candidates:

John Kasich was his decent self, but he didn’t make much of an impression. He talked about his Ohio record, but didn’t have anything interesting to say about what he would do as President.

Chris Christie was a real presence in the debate, but his “this election is about you” shtick wasn’t backed up by many details.

Scott Walker was more energetic this time, but not very impressive. He doesn’t have a presidential presence or intellectual heft. He was a creature of pre-cooked one-liners. I suspect he’s over his head in this crowd.

Ted Cruz and Mike Huckabee were in a mini-contest to become standard-bearer of the Christian right. Bobby Jindal and Rick Santorum, who appeared in the Junior Varsity debate, are also part of this conversation—as is Ben Carson—but I suspect that Cruz, the sharpest of the bunch, may emerge as the last wingnut standing.

Ben Carson had a quiet debate, but some of his weirder edges are beginning to show, as when he called the progressive income tax “socialism.” It took Donald Trump—in a startling display of substance—to point out that the progressive tax had been around for more than 100 years.

Carly Fiorina was described as one of the winners of the debate, and it’s easy to see why: she’s crisp, polished, really good at this. Her passionate answers on the Planned Parenthood controversy and her child’s death from drug abuse have been largely overlooked because of her contretemps with Trump, but I suspect they made a real impact on the evangelical community. Unfortunately, her rather ridiculous foreign policy answers—she’d call the Ayatollah? Good luck!—were overlooked, too.

Jeb Bush was in the middle of much of the action, and sharper than he was in the first debate. But he still needs to turn it up a notch. He could have leveled Trump with a more succinct, and combative, answer on the Florida casino controversy. He could have said, “You tried to bribe the state of Florida so you could bring your casinos in, but I stopped you.” But he was fuzzier than that…and he seemed to be searching for words—this “raucous” political debate—when he called for Trump to apologize to his wife. (He might check the tape of Bill Clinton defending Hillary against Jerry Brown back in 1992. Clinton nailed it.) As always, Bush was solid on substance and he didn’t hurt himself in the debate–but he is being surpassed in these events by Rubio.

Rand Paul had a much better night than his August performance. He talked more sense about foreign policy than all the other candidates on stage put together. Unfortunately, his views don’t have much purchase in this Republican party. Trump did him a huge favor by slurring him right out of the box, which brought Paul into the center of the insult debate.

Marco Rubio is becoming a force to be reckoned with—on the debate stage. He is fluent, smart and bold. I was especially struck by two of his answers that haven’t received much post-game notice. One was his defiant answer on climate change: he refused to take any actions that would limit the US economic growth. You can take issue with his position, but he made the clearest, most comprehensible to voters, case against a radical climate change effort that I’ve heard. The other was his story about learning about the glories of American democracy—in Spanish, from his grandfather. With that, Rubio actually won the Trump-Bush debate on Spanish speaking in public. There was one other thing about his performance: he looks so much younger than his opponents. I’m sure this might work against him with some voters, but last night he seemed fresh and everyone else seemed tired. 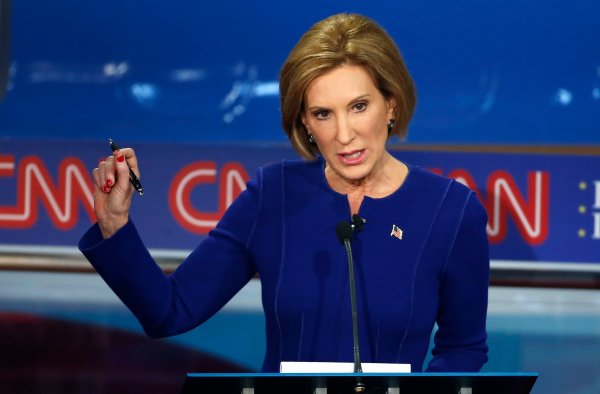