Indonesia Arrests Executives Accused of Being Behind the Region's Notorious Haze

With much of Indonesia, Malaysia and Singapore affected by choking seasonal air pollution, Indonesian authorities have arrested executives from seven companies it says are partly responsible.

“The haze” is an annual phenomenon caused by both large companies and smallholders setting illegal fires to clear jungle for palm-oil and pulp plantations, the BBC reports.

According to the BBC, Indonesian authorities said those arrested were from companies based in Sumatra or Indonesian Borneo, but did not reveal how many executives were arrested.

Another 20 companies are reportedly under investigation. The individuals involved could face penalties of up to 10 years in prison.

The haze poses serious health problems for affected areas. More than 22,500 cases of acute respiratory tract infections have so far been recorded in southern Sumatra with 100,000 in East Kalimantan province. More than 1.5 million students have meanwhile been sent home from school closures in Malaysia.

Organizers of the famed Formula 1 Grand Prix in Singapore say the event will go ahead despite the air quality. 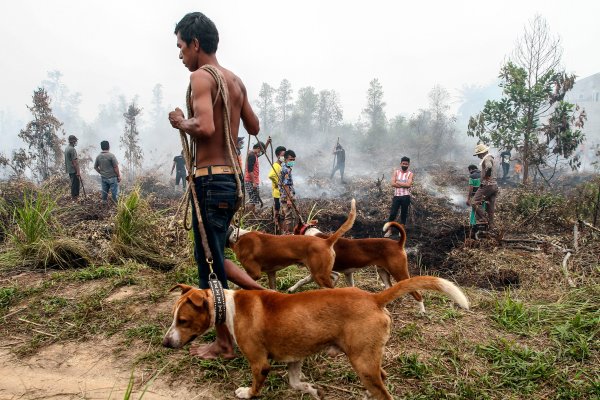 Indonesia's Largest Island Engulfed in a Thick Haze From Forest Fires
Next Up: Editor's Pick