This Is the California Friar the Pope Is About to Canonize

A statue of Father Junipero Serra in Statuary Hall in the US Capitol in Washington, DC, seen on Jan. 30, 2015.
Jim Watson—AFP/Getty Images
By Lily Rothman

Months of planning have gone into Pope Francis’ visit to the United States—but that’s nothing. One of his stops has been in the making for eight decades. On Wednesday, at a Mass in Washington, D.C., the Pope is planning to officially canonize a new saint with an appropriately American story: Junipero Serra.

Serra’s beatification was set in motion in the 1930s. As TIME explained then, Serra and his followers were responsible for building of 21 missions in California. Jesuits had visited the region earlier, but in the 1770s they were replaced by Franciscans led by the Spanish-born Serra:

Though there’s no question of Serra’s influence on American Catholicism, his canonization is not without conflict: many of those Native Americans were converted by force, and some see the celebration of Serra’s legacy as an affront to the local cultures the missions set out to change. Others see his story as illustrative of the power of faith in America’s complicated past, and representative of California’s blend of indigenous and Spanish history.

The Wednesday Mass won’t be the only time Serra and the Pope cross paths this week: Pope Francis plans to visit the U.S. Capitol on Thursday. The Capitol’s statuary hall is home to a bronze statue of Serra, which was presented by the state of California in 1931.

Read the full story from 1937, here in the TIME Vault: Sainthood for Serra? 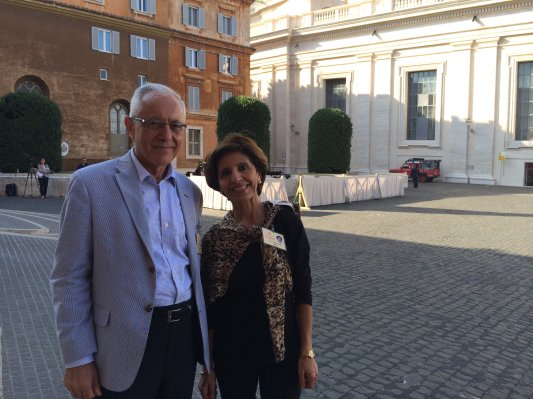