Watch Tim Cook Explain Why He Came Out as Gay

Apple CEO Tim Cook says he felt a “tremendous responsibility” to publicly come out as gay.

“It became so clear to me that kids were getting bullied in school, kids were getting basically discriminated against, kids were even being disclaimed by their own parents and that I needed to do something,” Cook told Stephen Colbert during a Tuesday The Late Show interview about why he opened up about his sexuality in a 2014 Bloomberg editorial.

Though many of the people he works with already knew he was gay, Cook says, his decision to speak up was inspired by a Dr. Martin Luther King Jr. quote, “Life’s most persistent and urgent question is, ‘What are you doing for others?’”

“Where I value my privacy significantly, I felt that I was valuing it too far above what I could do for the people,” Cook said. “I wanted to tell everyone my truth. Many people already know. For many people, it was no revelation. It’s like discovering something on your iPhone it’s always done but you didn’t quite know it.”

Cook also told Colbert that he isn’t thrilled about the all movies about his late predecessor, Steve Jobs. First, there was the 2013 film starring Ashton Kutcher, Jobs, and now there’s the upcoming Steve Jobs, which stars Michael Fassbender and hits theaters Oct. 9. (This month also saw the release of the documentary Steve Jobs: The Man in the Machine.)

“I love him dearly and I miss him every day,” Cook said. “I think that a lot of people are trying to be opportunistic, and I hate this. It’s not a great part of our world.”

Others close to Jobs have given their approval, however, to the Fassbender film, which was directed by Danny Boyle (Slumdog Millionaire) and written by Aaron Sorkin (The Social Network). Apple co-founder Steve Wozniak said he felt like he was “actually watching Steve Jobs” and thanked the filmmakers for “getting it so right.” 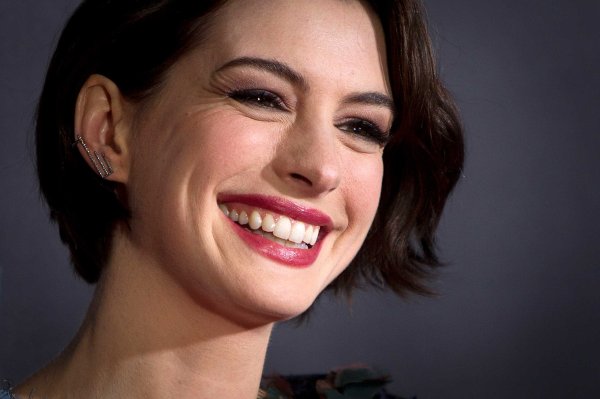 Anne Hathaway Is Bookies' Favorite to Play the New Mary Poppins
Next Up: Editor's Pick