Sir Elton John and his band, during his performance at Royal Theatre in Madrid, Spain on July 20, 2015
Abraham Caro Marin—AP
By Joanna Plucinska

It seems Elton John and the Kremlin are singing two different songs — a spokesman for Vladimir Putin’s government has expressly denied that a conversation has taken place between the outspoken singer and the Russian President a day after the Briton said otherwise.

John posted a photo of Putin on his Instagram on Monday, with a caption that said Putin had called him to speak about LGBT rights and that the two would eventually meet in person to continue their discussion.

But on Tuesday, Kremlin spokesperson Dmitry Peskov said that he had no knowledge of the phone call and questioned the “authenticity” of John’s post, the Guardian reports. “I don’t doubt that if there is such a request, the President will be ready to meet with Elton John among others to give answers to all the questions that he might ask,” Peskov told journalists on Tuesday. “But we haven’t received such signals yet.”

Elton John, who has played many shows in Russia since 1979 and has a large fanbase there, has been an outspoken critic of the Moscow government’s staunch anti-LGBT stance.

Earlier this month, the “Candle in the Wind” singer joined forces with Ukrainian President Petro Poroshenko to discuss homophobia at a conference in the Ukrainian capital Kiev. There, John told the BBC that he wanted to speak with Putin about his views on LGBT rights, admitting that the prospect of a conversation might be “pie in the sky.” 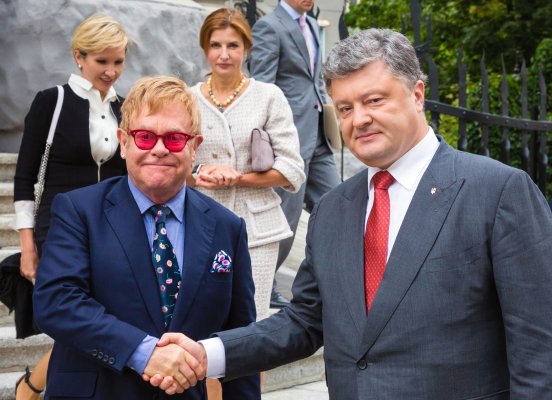