The California Wildfires Are Going to Cost Billions

Northern California’s Valley and Butte wildfires have displaced more than 20,000 people since this weekend as they continue to blaze north of San Francisco and south of Sacramento, respectively. As of Tuesday morning, the two fires have burned across a total of 138,660 acres and caused the death of a retired teacher who was unable to escape her burning home, according to the Los Angeles Times.

Before the Valley and Butte wildfires exploded, California Governor Jerry Brown’s administration pegged the total cost of the state’s wildfire season at more than $212 million through early last week.

The Valley fire is on track to be the most destructive California wildfire, measured in insurance losses, since the Oakland firestorm of 1991, according to senior research meteorologist Mark Bove at Munich Re America, a reinsurance company. That fire resulted in an industry-wide insurance cost of about $3 billion. But the holistic cost of wildfires goes far beyond the cash that insurance companies dole out for destroyed buildings. The other costs–of fire suppression, post-fire rehabilitation, and indirect impacts like drops in property value and lost taxes–can add to up make total expenses of a wildfire more than forty times the cost of insurance claims.

The cost of fire suppression is soaring as the fire season lengthens and grows more severe, according to a report published last month by the U.S. Forest Service. Between the last fiscal year and the current one, the Forest Service had to expand its fire suppression budget by $115 million, cutting into its other non-fire programs like restoration and land management, in order to fund the thousands of firefighters and sophisticated equipment used against fires. Last year, the ten largest fires cost more than $320 million to combat. The Forest Service projects that its fire suppression costs will grow from around $1.1 billion in 2014 to $1.8 billion by 2025.

Then, there’s the cost of destroyed and damaged property–a dollar value that’s much harder to pin down. Bove says that more than half of this year’s burned acreage was in Alaska, where few insured and uninsured structures stood in the wildfires’ way. For smaller, rural fires, experts don’t have a great idea of the total damage. It’s not until a major fire breaks out that property losses are tallied–and those major fires are occurring more frequently. In 2013, 21 fires that burned across the United States resulted in losses of $10 million or more, according to a 2014 report by the National Fire Protection Association. Some of the worst fires–a group the Valley fire is expected to join when the embers have cooled–cost well over $1 billion in insurance claims.

The other post-fire rehabilitation costs include operations like reforestation, erosion barriers, reseeding, and flood control. These efforts attempt to mitigate the risk of future destruction, like mudslides or flooding. In a survey of case studies published by the Western Forestry Leadership Coalition, rehabilitation costs ranged from $8 billion in the case of a 44,000-acre Montana fire in July 2000 to more than half a billion dollars in the wake of a 2003 wildfire complex in California that burned across 125,000 acres.

Finally, there is a host of indirect costs that are even greater to quantify: a decline in nearby property value, lost tax revenue from closed parks and businesses, emergency assistance to those displaced by the fires, and ongoing respiratory health concerns for people who live nearby.

What’s the bottom line? That depends. And for the still-raging Valley fire, experts say the jury’s still out. This much is clear: Brown’s previous estimate for the cost of this season’s wildfires will look like a drop in the bucket in comparison. 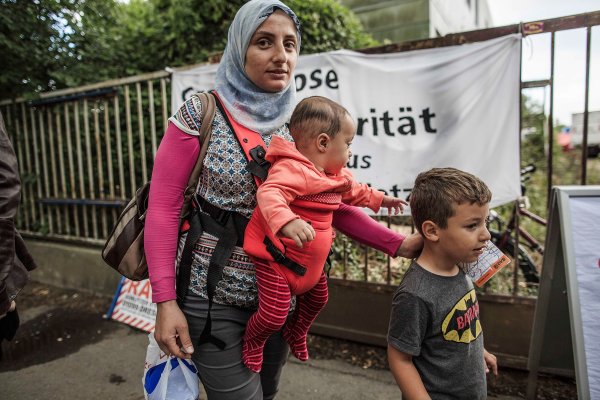 Here's Why Germany Is Welcoming Migrants With Open Arms
Next Up: Editor's Pick