Tide To Go is poised to enter the gay marriage debate with a new tongue-in-cheek ad. Director Mark Nickelsburg posted the commercial to his Facebook page, and while the ad hasn’t hit the air yet (and it’s unclear whether it actually will) it’s already generating a lot of buzz.

In the commercial, two men head to the altar, but are stopped on the church steps by a serious looking woman determined to make sure they don’t “blemish the sanctity of marriage!” As the couple winds up for a massive argument, the woman pulls out a Tide To Go pen and removes a stain from the shirt of one of the grooms. When the stain is gone, the men receive the blessing of the woman, played by Pee Wee’s Playhouse actress Lynne Marie Stewart a.k.a. Miss Yvonne, the most beautiful woman in the world.

The ad is certainly timely. In his Facebook post Nicklesburg references Kim Davis, the clerk who was jailed after refusing to authorize marriage licenses to same-sex couples. He noted, “First a clerk in Kentucky, and now a church lady in Los Angeles! This same-sex couple faces yet another obstacle on the way to marriage equality in this spot I directed for Tide to Go.”

This isn’t the first time Tide has featured a gay couple in one of their commercials. An ad that aired in Canada featured a gay couple arguing about laundry. Tide’s parent company, Procter & Gamble, has prominently stated their support of marriage equality, using their official Twitter account to promote the cause and noting that “labels are for products, not people.” 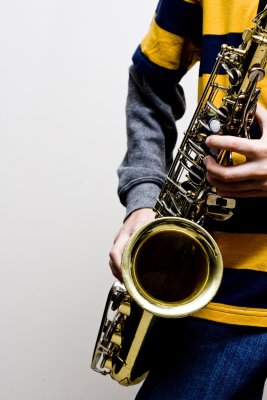 Watch This Awesome Kid Play Saxophone While Juggling a Soccer Ball
Next Up: Editor's Pick