While it’s certainly impressive that Elon Musk has bachelor’s degrees in physics and economics from the University of Pennsylvania, it’s an absurd overstatement to say that prepared him to run SpaceX, his spacecraft company.

Jim Cantrell, who was an aerospace consultant at the time, became SpaceX’s first VP of business development and Musk’s industry mentor when the company launched in 2002. He says that Musk literally taught himself rocket science by reading textbooks and talking to industry heavyweights.

Cantrell’s first contact with Musk was a cold call in 2001. As he explains to Esquire:

Musk learned about Cantrell through Robert Zubrin, the founder of the Mars Society. Musk knew that Cantrell was an expert in Russian rockets and wanted to learn how he could get a spacecraft to Mars.

After reading Cantrell’s response in the Quora thread “How did Elon Musk learn enough about rockets to run SpaceX?,” we asked him to share some insights into his time with Musk.

Below, he explains the two-part learning process that Musk used to teach himself rocket science.

He committed textbooks to memory

“He is the smartest guy I’ve ever met, period,” Cantrell tells us. “I know that sounds overblown. But I’ve met plenty of smart people, and I don’t say that lightly. He’s absolutely, frickin’ amazing. I don’t even think he sleeps.”

Cantrell tells us that he soon discovered that he and Musk shared an affinity for applied knowledge, and he loaned him some textbooks to study (they “were never returned, by the way!” Cantrell says). The books were “Rocket Propulsion Elements,” “Aerothermodynamics of Gas Turbine and Rocket Propulsion,” “Fundamentals of Astrodynamics,” and the “International Reference Guide to Space Launch Systems.”

He doesn’t know exactly how Musk would read or take notes, but he knows that he practically memorized them.

“He would quote passages verbatim from these books. He became very conversant in the material,” Cantrell says.

He built a network of the smartest people

Musk “knows everything about what he’s building,” Cantrell says, but of course even he understands that he can’t master everything. That’s why he used Cantrell’s network in the aerospace industry to gather some of the best in the business. “It was like spaceapalooza!”

For example, they hired the rocket engineer Tom Mueller, who Cantrell says is the smartest propulsion expert out there. Musk respected his deep knowledge and let him take care of things that he’d learned from years of research.

In the same way that Musk absorbed books, he tried doing that with other people’s expertise. “It was as if he would suck the experience out of them. He truly listens to people,” Cantrell says.

Musk would absorb this information and then hold his own in conversations — and he didn’t hold back. Cantrell says that Musk took a tech entrepreneur’s approach to the industry and believed that many of the opinions of industry mainstays were stupid.

“He insulted a lot of people in those days! I wasn’t insulted, but I was taken aback. He’s an original thinker,” Cantrell explains.

Cantrell left SpaceX in 2002 because he says he simply did not share Musk’s intense passion for his mission to land on Mars. But he tells us that he did it out of respect for Musk’s passion and has no regrets about his decision.

He’s currently working on a book about the early days at SpaceX, and he thinks that Musk’s genius blend of capitalism, curiosity, and motivation will make him a true pioneer.

“He’s used a billion dollars to do what NASA couldn’t do with $27 billion,” Cantrell says. “Boy, it’s inspiring.” 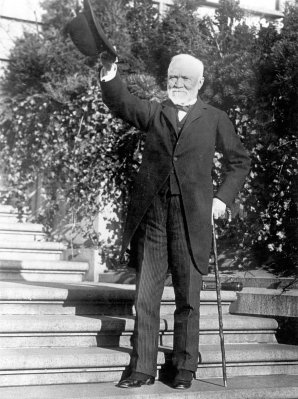 These Are Andrew Carnegie's 10 Rules of Success
Next Up: Editor's Pick