Refugees get out of a special train coming from Munich upon arrival at the railway station in Berlin Schoenefeld, on Sept. 13, 2015.
Axel Schmidt—AFP/Getty Images

BRUSSELS — Germany announced Monday it expects to handle one million people fleeing their homelands this year and Slovakia joined Berlin in reintroducing border checks with Austria, underscoring the need for European Union nations to quickly forge a common strategy to deal with Europe’s immigration crisis.

Interior ministers from the E.U.’s 28 nations gathered for emergency talks in Brussels to try to narrow a yawning divide over how to share responsibility for the thousands of migrants arriving daily and how to ease the burden on the front-line states of Greece, Italy and Hungary.

Their talks will focus on distributing 160,000 refugees over the next two years — but at least four Eastern European nations have strongly rejected suggestions they should take in any more people.

The decisions by some E.U. nations to have checks at borders that have been open as part of the EU’s landmark Schengen passport-free zone has added urgency to the talks.

The arrival of around 500,000 migrants so far this year has taken the EU by surprise — and Germany warned Monday those figures would swell further.

Germany’s vice chancellor Sigmar Gabriel said in a letter to his Social Democratic Party that “everything points the fact that we won’t have 800,000 migrants as has been predicted by the Interior Ministry but 1 million” in Germany alone.

Lacking a quick and comprehensive policy answer, EU nations have begun tightening border security or, in the case of Hungary, erecting fences. Greece is simply overwhelmed by the numbers of people coming across the sea from Turkey and cannot properly screen the migrants, let alone lodge them.

Germany’s decision to reintroduce border checks temporarily is allowed under the Schengen rules governing free movement within the EU. Gabriel defended his government’s move, saying it should be a “clear signal” to our “European partners that Germany, even if we are prepared to provide disproportionate assistance, cannot accommodate all of the refugees alone.”

Germany takes in more refugees than any other European nation by far.

Dutch Foreign Affairs Minister Bert Koenders said the temporary border measures showed the need to quickly come up with a more comprehensive deal on the refugees.

“It means that we have make progress about the relocation today,” he said.

Adding to the unraveling of free travel within most of the EU, Slovakia said Monday that 220 extra officers have been deployed at border crossings and along the border. It said authorities were also coordinating with police forces in neighboring Austria, Hungary and the Czech Republic.

The Czech Republic on Sunday boosted its presence along its border with Austria but has not reintroduced border checks yet.

Humanitarian groups have been critical of the slow European response to the crisis that has seen thousands of families trekking across its eastern nations by train, bus or foot — and fear Monday’s meeting could turn into yet another ineffectual meeting.

“Bear in mind that the decisions adopted in previous summits have so far largely failed to improve the situation,” Doctors Without Borders President Joanne Liu said in a letter to EU leaders. 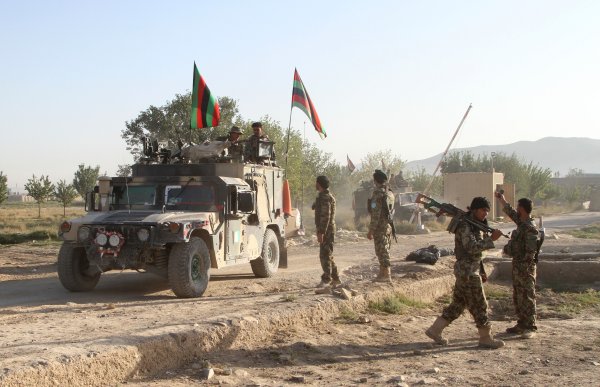 A Taliban Attack on an Afghan Prison Has Freed Hundreds of Militants
Next Up: Editor's Pick