“Are we getting drinks?” Novak Djokovic asks a couple of friends — including the actor Gerard Butler — outside the U.S. Open locker room late Sunday evening, after he felled New York crowd favorite Roger Federer in four sets to win his third Grand Slam tournament title of the season, and the 10th of his career. “We can have some drinks.” The plan is to meet up in New York City after Djokovic finally finishes his post-match media obligations. His wife Jelena shoots him a mock disgusted look. “Nooooo,” she says. Novak and Jelena are new parents — their son Stefan is 11 months old. Jelena smiles. “Go ahead, take the selfie now,” she tells her husband. Djokovic and Butler mug for a cell-phone camera. The night before, Djokovic had watched 300, the 2006 movie in which Butler plays a Spartan king at war with Persia. Now they shout the movie’s most famous line into the phone: “THIS IS SPARTA!”

Djokovic has good reason to goof around. Sunday night’s 6-4, 5-7, 6-4, 6-4 win was a wrap on another spectacular Slam season for the Serbian, and a sign of his historic potential. Going into this year’s tournament, Serena Williams was the story, especially in the U.S. — she was going for the first calendar year Grand Slam sweep, by a woman or man, since 1988. But Roberta Vinci stunned her in Friday’s semifinal. So Williams ceded the U.S. Open stage to Djokovic, who, were it not for a single loss, to Stan Wawrinka in the French Open final, would be going for a Grand Slam of his own.

For the second time in Djokovic’s career, he has won the Australian Open, Wimbledon and the U.S. Open in the same year — a feat he also accomplished in 2011, when he finished the season 70-6. He’s only 28, in peak physical condition and now primed to make a run at Federer’s record of 17 career major titles. “I think he’s playing very well, are you kidding me?” says Federer. “Seems like there are not many guys that can hang with him, don’t have the tools or dare to go forward, or they don’t dare to serve and volley against him because he’s so good on the return … He’s having an unbelievable career.”

Still, the New York crowd lusted for a Federer victory. Hours before the start of the match, which was delayed for three hours because of rain, fans walked the Billie Jean King National Tennis Center grounds holding their overpriced champagne glasses, wearing “RF” hats. Federer, 34, was playing in his first U.S. Open final in six years. Federer followers are a particularly loyal lot: they revere his balletic one-handed backhand and worship his grace. Just one last title at the U.S. Open — a tournament that Federer won five straight times, from 2004 to 2008 — at such an advanced age would validate their devotion and further enhance their claim that they cheer for the greatest player in history.

So Djokovic had to fight through the noise. Federer helped him out a bit, by making an unusual amount of unforced errors with his forehand — 29, to Djokovic’s 10 — and winning just four of his 23 break point opportunities. A handful of times, fans screamed for Federer during Djokovic’s serving motion, a breach of tennis etiquette. Djokovic looked ticked, but overall, he deftly handled his vocal opposition. “I can’t sit here and criticize the crowd,” Djokovic says. “Everybody has a choice to support a player that they want to support, and he absolutely deserves to have the support he does because of all the years and success that he had and the way he carries himself on and off the court. No question about it. Me, I’m there to earn the support. And hopefully in the future I can be in that position.”

Djokovic will be in that spot — beloved champion — real soon. Federer’s far from done; though he hasn’t won a Grand Slam title in three years, he’s playing some of the best tennis of his career. Unfortunately for him, Djokovic is proving himself more consistent on hard courts and grass than Rafael Nadal. Afterward, Djokovic was asked if Federer’s Grand Slam record is in his sights. “Well, we got to double digits,” Djokovic says. “I have always valued the care for my body and my mind and had this holistic approach to life. I always thought this is of utmost important for my tennis. I will continue on with the same kind of lifestyle … As long as there is this flare in me, I will keep coming back.”

Just as soon as he gets to those drinks. 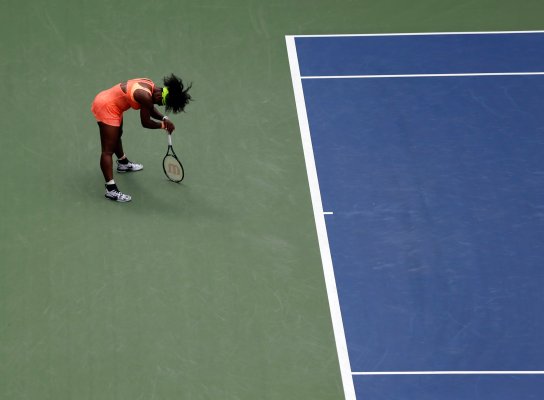 The Grand Slam Is Dead, but Serena Will Still Live Loud
Next Up: Editor's Pick