On Sunday, Last Week Tonight tackled public defenders, or as John Oliver defines them, “the only people who have been to court more frequently than former child stars.”

If you don’t know any public defenders, you probably recognize them from TV, where arresting cops tout the fact that if you can’t afford an attorney, one will be provided to you. However, according to Oliver, while access to a lawyer is supposed to be a constitutional right, if you’re poor it can be incredibly difficult to access their over-worked, under-appreciated services.

According to Oliver, Fresno County public defenders represent up to 1,000 felonies a year, while state guidelines recommend no more than 150. As Oliver points out, that’s three cases a day, or in other words, “Gerard Depardieu wine-drinking numbers.” In New Orleans, part-time public defenders have an average of seven minutes per case to prepare a defense, such a short span of time that Oliver noted he would not be able to write his show, but only a ranking of attractive Muppets. New Orleans has put up a crowdfunding page to help cover its budget shortfall. “No one should be in jail because a Kickstarter didn’t meet its goal,” said Oliver, noting that the people behind the successful Kickstarter for an inflatable Lionel Richie head should be in jail “all night long.”

“It’s easy not to care about this [issue],” Oliver said, so he devised a way to make people interested: Bring in a bunch of TV cops like Dennis Quaid, Sonja Sohn, who played Kima Greggs on The Wire, Jeremy Sisto from Law & Order, and many more to help rewrite the Miranda warnings and let criminals know that an attorney will be provided to them, but only if they can afford it. 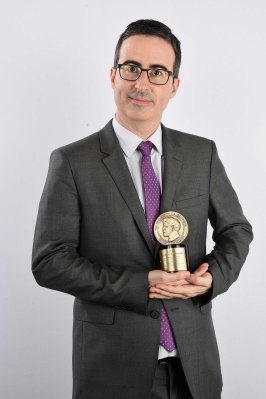