A laborer cuts steel bars at a railway-bridge construction site in Lianyungang, in the Chinese province of Jiangsu, on Sept. 12, 2015
China Daily—Reuters
By Nash Jenkins

China’s economic slowdown continued through August, with both factory output and investment growth in the mainland failing to fulfill forecasts. The slump comes despite numerous state interventions to spur growth, including the repeated slashing of interest rates since last November.

Analysts told Reuters that Chinese economic growth in the third quarter — which closes at the end of September — may fall below 7% for the first time since the global financial crisis.

From January through August, the pace of fixed-asset investment growth fell to around 11% — its slowest since 2000, due in part to a chastened property sector. Factory output rose by a disappointing 6.1%.

“The economy is showing no sign of recovery,” Ding Shuang, a Hong Kong–based economist, told Bloomberg. “From the perspective of monetary policy, the government has done what it can, but demand from the real economy needs to pick up to really make use of that.”

Despite the recent slowdown, however, foreign firms remain focused on the Chinese market and unlikely to reduce investment even when facing an unprecedented wave of domestic competition, Wendy Liu, who heads China equity research at Nomura, told the South China Morning Post. 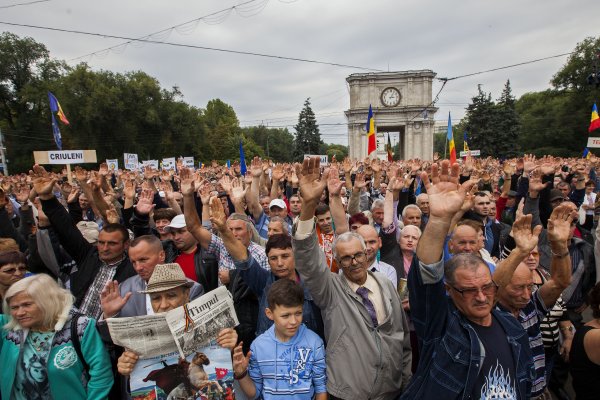 Protests in Moldova Enter Second Week
Next Up: Editor's Pick