Kentucky Clerk Kim Davis Mocked by Billboard in Her Hometown

Kentucky Clerk Kim Davis is going back to work on Monday, but some in her hometown aren’t ecstatic, and they’re not shy about letting the clerk know how they feel.

Planting Peace, a nonprofit, sponsored a billboard in Rowan County, the Kentucky county Davis works in. The billboard defends gay rights and criticizes Davis’s decision to not issue same-sex couples marriage licenses—a decision that led to Davis being held in jail for five days.

“Dear Kim Davis, the fact that you can’t sell your daughter for three goats and a cow means we’ve already redefined marriage,” the billboard says.

The message refers to a Bible scripture in Exodus that suggests women can be sold into a marriage.

Aaron Jackson, president of Planting Peace, says the billboard cost $500 and will remain in place for one month. “The anti-LGBT movement is selective in what rules to follow and how they choose to define ‘traditional’ institutions or values,” Jackson told NBC.

Jackson said Planting Peace was attempting to show gay people around the world that they were supported. “You are loved, valued, supported, and beautiful,” he said. “There is nothing wrong with you, and we will stand by you. You are not alone.” 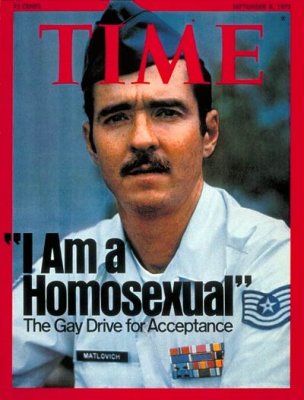 How a Closeted Air Force Sergeant Became the Face of Gay Rights
Next Up: Editor's Pick