How Runway Fashion Photography Has Changed Over the Decades

New York Fashion Week is back and Dan and Corina Lecca are ready: the husband and wife team are 30-plus-year veteran runway photographers, but no amount of experience could numb you to a schedule like the one fashion demands.

Take today, for example: If all goes according to plan, there’ll be at least one show to shoot every hour on the hour, with one brief break for dinner. In some cases, when the Leccas are shooting for the house—when they’ve been directly hired by a designer to record a show—they need to turn around the photos immediately, so they can go up online right away. The last show won’t end until more than 12 hours after the first one began. Then, rather than going to a party or going to sleep, the Leccas and their team must return to their home in Jackson Heights, Queens, to process, back up and file the day’s work. By the time they finish, it will be after midnight. Then it starts all over again. And, when New York is done, it’s off to London and Milan and Paris.

And this year could be particularly trying: for the first time since the early 1990s, New York Fashion Week will have multiple main venues in multiple neighborhoods.

“It’s going to be a little bit of hell,” Dan Lecca tells TIME with a laugh. But if it’s a grueling lifestyle, it’s also been a rewarding one for the couple. The American fashion industry has evolved dramatically in the last few decades—the Leccas recall the days of taking tiny elevators to tiny showrooms throughout the fashion district, and the more chaotic early days of Fashion Week—so it’s no surprise that the business of being a runway photographer has changed too. The Leccas have not only had first-row seats to those changes, they’ve also helped define what their results would be.

It’s a role that neither of them would have predicted. “We had no idea when we started that this would be our career,” says the Romania-born Dan. “I would say [it was] eight to ten years and then we realized we were stuck.” (His wife, who grew up in Italy, objects to that word choice. “Stuck is the wrong word,” he corrects himself. “We are needed, we are wanted, we’re providing a great service.”)

“Corina and I started shooting in this business without having an extraordinary preparation for it,” he adds, “but we succeeded immediately because we have very good eyes and a smart way of focusing.”

One example of their influence during the pre-digital era, Dan Lecca says, came when they realized that hiring a changer—someone to hand them a fresh camera when a roll of film ran out—would mean they could avoid missing a single look. Hiring changers eventually led to hiring an editor, who could look at their film while they continued to work, and then hiring other photographers who work in the Lecca-approved style.

But not every change has made things easier. As digital has replaced film, they explain, the idea that photography should be less expensive has forced the industry to contract. Meanwhile, the influx of Asian designers and buyers into the global fashion market has meant that Europe- and North America-based photographers are competing with Asian photographers, as well as with untested young photographers who hope to use digital photography or the Internet to skip straight to the top.

Runway photographers can be wary of new faces, not because they’re unfriendly but because the tightly packed photographers’ podium at a runway show means that one misplaced movement can throw off the whole group. They’ve seen—and been involved in, Dan admits—fights over space, and someone who takes up too much of it is a liability. But Corina says she tries to help those new people find somewhere to stand, somewhere they can learn the ropes without getting in the way. After all, they were newbies too, once—and they credit their one-time innocence about the fashion world with a large portion of their success.

“The point is we [took] one step and then another step and we never sat down and said, ‘Oh, what should we plan?’” says Corina.

“We cannot plan anything,” jokes her husband. “Except the schedule for Fashion Week.” 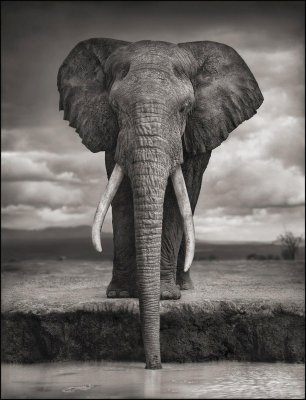 These Photographers Launched Their Own Foundations to Create Change
Next Up: Editor's Pick