Benedict Cumberbatch has criticized the British government’s response to the refugee crisis and made a plea on behalf of charity Save the Children for funds going to support refugee children.

Speaking on Thursday evening at the curtain call of a performance of Hamlet in London, the 39-year-old actor made an impromptu speech, urging the audience to donate cash to help the refugee crisis that has seen more than 4 million Syrians seek shelter in other countries, and another 7.6 million displaced from their homes within Syria.

Cumberbatch spoke of “our government’s slow response”, The Guardian reports, after Prime Minister David Cameron announced earlier this week that Britain would take 20,000 Syrian refugees over the next five years – a pledge that many have called “too little, too late.” His speech coincided with the release of charity single Help Is Coming, whose proceeds will go to Save The Children. Cumberbatch introduced the song in a short video, posted to Youtube on Thursday, which quoted sections of the poem Home by Somali-British writer Warsan Shire:

The Help Is Coming video is a re-release of the 1999 Crowded House single.

At the end of his introduction, Cumberbatch says: “As people watching this tragedy unfold from the safety of our homes, with our safe children, we want to say that we see you, we hear you and help is coming.”

Read next: This graphic shows the astonishing scale of the Syrian refugee crisis 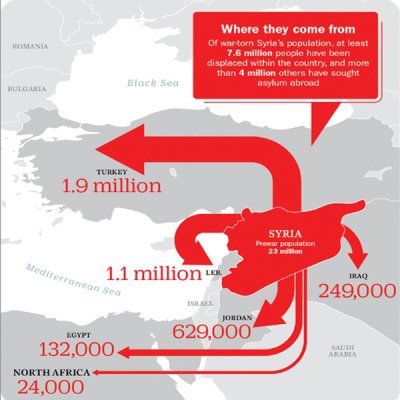 This Graphic Shows the Astonishing Scale of Syria's Refugee Crisis
Next Up: Editor's Pick