The aggressive tax-cutting proposal former Florida Gov. Jeb Bush outlined this week would eliminate all federal income taxes on families making $38,600 or less, and another 42 million families would see their bills on Tax Day cut by one-third.

Another winner in the Republican White House hopeful’s plan? Bush himself.

Economists at the liberal Center for American Progress Action Fund reviewed Bush’s 2013 tax returns, his most recent ones available, and found that his federal tax liability would have been $773,677 less in that year. It’s a staggering sum but reflective of Bush’s overall plan to dramatically cut taxes across the board in the hopes that Americans would use their newfound pocket change to buy more goods and grow the economy.

“As George W. Bush promised in his sales pitch for tax cuts, Jeb Bush promises that all will benefit from huge economic growth from his agenda,” CAP’s director for fiscal policy Harry Stein writes in an analysis that will be released Friday and obtained first by TIME. “But we already know how things turned out after the first Bush tax cuts: federal budget surpluses turned into massive deficits and instead of widespread economic growth we got the Great Recession.”

But Jeb Bush’s plan isn’t exactly like his brother’s effort. It actually goes further in terms of simplifying the tax code and repealing popular deductions.

The math clearly benefits Bush, who reported an adjusted gross income of almost $7.3 million in 2013. He would seriously benefit if the top tax rate was reduced to 28% from the current 39.6%. In his net income, he reported $730,898 of taxable interest, long-term capital gains and dividends that qualify for reduced tax rates. Under Bush’s plan, this income would be taxed at 20%.

Elsewhere on the tax returns, he would save $33,000 if he can repeal one of the Affordable Care Act taxes on investment income. If he were able to repeal another Obamacare tax on wages, he would save another almost $50,000. Repealing Obamacare, for Bush, would have saved him $82,901 on his 2013 taxes.

Stein acknowledges that these are estimates based on what Bush has announced. Some of the details in his plan are vague, and it’s not clear how Bush would address some of the trickier pieces of the tax code. But it’s a clear example of how high-wage earners would benefit from the tax plan the most.

“Even the conservative analysts at the Tax Foundation acknowledge that the top 1% get the most benefit from Jeb Bush’s plan—and that assumes that the plan causes massive and widespread economic growth,” Stein writes. “At a time when middle-class programs like Social Security and Medicare will need more revenue over the long-term to meet the needs of an aging population, this plan is simply not sustainable for the nation.”

Bush’s campaign disputed the math and said Bush—and all Americans—pay too much in taxes.

“Under the Obama/ Hillary/ DNC tax plan, Governor Bush pays 40% of his income to an incompetent federal government,” spokeswoman Allie Brandenburger tells TIME. “Hillary Clinton thinks Americans should pay even more taxes. Governor Bush’s answer is to get money back to families and put in place a strategy where the economy grows again.”

She adds that, as a result of middle- and low-income workers paying less in taxes, “the highest earners actually pay a greater share of the taxes than they did before.” 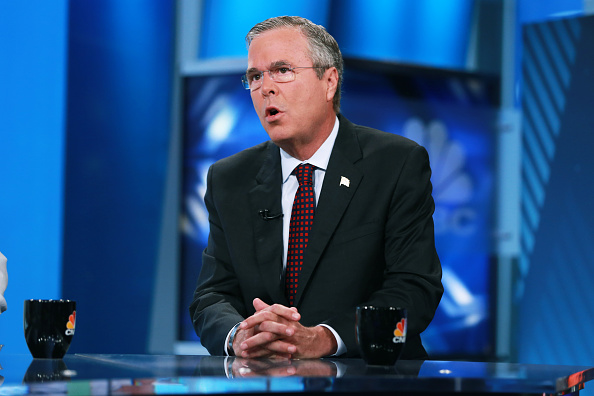