Chinese President Xi Jinping will arrive in Washington for a visit with President Obama later this month at a moment of danger for U.S. relations with China. There’s a real risk that things are about to get worse between these governments, and it’s not clear either leader is as worried by that as he should be.

Obama can feel a bit bolder these days. He has secured a deal on Iran’s nuclear program that opponents in Congress lack the votes to override and established a breakthrough in relations with Cuba. Those accomplishments are controversial, but this famously cautious man is close enough to the end of his term to ignore complaints and condemnations from the usual critics and to press ahead on what he sees as points of principle.

Xi, on the other hand, has had a rough summer. Since assuming power in 2012, he has used a broad anti-corruption to sweep aside opponents of his economic reform drive within the leadership. In recent weeks, though, poor economic data, a stock market down about 40 percent since May and international criticism of a decision to weaken China’s currency have put Xi on the defensive.

But now is not the time for China’s leader to project uncertainty. Both Xi and Obama are likely to be more assertive on foreign policy—Obama, because he feels he can afford to, and Xi, because he may feel he can’t afford not to.

The first sign of Obama’s tougher line: Targeted U.S. sanctions on Chinese companies accused of conducting cyberespionage on U.S. firms. The administration will also limit access of some Chinese companies to U.S. markets. China’s alleged hack into the U.S. Office of Personnel Management earlier this summer has stiffened spines across Washington.

Obama hopes that sanctions targeting individual companies will draw a proportionate response from Beijing. For the moment, that looks to be the case. The Chinese government will retaliate against U.S. companies operating in the same sectors as Chinese firms facing new sanctions, but probably won’t up the ante, at least for now.Xi also plans to travel to Washington state during his visit to host a “tech forum” of US and Chinese firms. While there, he’ll meet with Bill Gates and other U.S. tech leaders, and Obama administration officials aren’t happy about it.

But at a time when Obama and Xi should be announcing progress toward a bilateral investment treaty, they’ll instead be debating how best to limit damage from the latest point of confrontation. The world needs these two governments to find common ground. These are the two largest economies and two largest trading nations. China is the world’s largest creditor state, and the United States has become the world’s largest debtor. They are the world’s two largest polluters. There is no way to maintain stability in the world economy, breathe life into global trade, tackle climate change, and manage other transnational problems without coordinated leadership and burden-sharing from America and China. 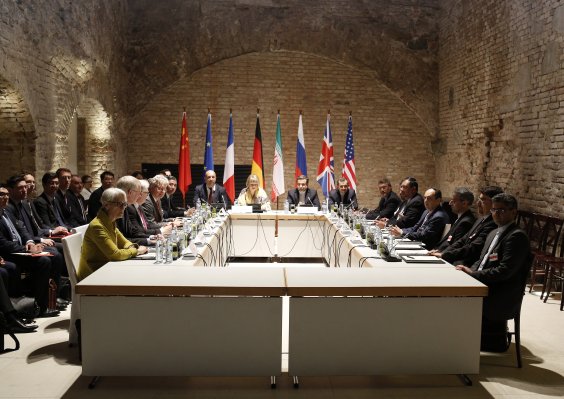 Switzerland Lifts Sanctions on Iran
Next Up: Editor's Pick