Sea levels around the world have been on the rise for years, but ice from Antarctica has contributed a relatively small fraction of water little to that total. The study, published in the journal Science Advances, shows how that will change if humans continue to burn fossil fuels.

“To put it bluntly, if we burn it all, we melt it all,” said study author Ricarda Winkelmann, a professor of climate systems analysis at the Potsdam Institute For Climate Impact Research.

Recent research suggests that fossil fuels—oil, coal and natural gas—sufficient to create more than 10,000 gigatons of carbon dioxide still remain on the planet. Each year human activity results in around 10 gigatons of carbon dioxide emissions, a number which has risen in swiftly in recent decades. And, while the numbers suggest the Earth has sufficient fossil fuels to supply humankind with energy for centuries, climate scientists say the climate change that would result from burning those fuels could remake the planet.

The most dramatic results documented in the new study would occur over thousands of years. Only a small fraction of the Antarctic ice shelf would remain in 10,000 years if humans consumed remaining fossil fuels in the coming centuries. Were the Antarctic ice shelf to melt totally, global sea levels could rise more than 50 meters (164 feet).

Read More: How Climate Change is Behind the Surge of Migrants to Europe

The study how burning fossil fuels now creates effects that extend into the distant future because ice melt does grow linearly with carbon emissions. Winkelmann emphasized that ice melt in Antartica thousands of years from now would be triggered by actions humans take in the much more immediate future.

“It would take a long time for the entire ice sheet to vanish,” she said. “But that doesn’t mean we can ignore it.”

Carbon emissions and subsequent rising temperatures diminish ice coverage in Antarctica in two main ways. The first, ice sheet instability, occurs when ice is below sea level and the bedrock on which it rests is sloped downward. In these situations, sea level rise creates an instability that could lead parts of an ice sheet to break off and melt. Once it gets started, it’s essentially unstoppable. A surface elevation feedback loop also contributes to the melting of Antartica. As temperatures rise, ice melts, lowering the continent’s elevation. This in turn increases melting as temperatures are higher at lower elevations.

For this study, researchers evaluated the effects of climate change Antartica over the very long term. Other earlier research shows how climate change may alter the ice-covered continent in the coming decades. Melting from the continent’s ice has led to approximately a quarter of a millmeter of sea level rise each year between 1993 and 2010, according to a 2013 report from the Intergovernmental Panel on Climate Change. That number is dwarfed by ice loss from glaciers and ice loss from Greenland. But that may not be the case for long.

“Currently Antartica is one of the minor contributors to sea level rise, and that’s simply because it responds more slowly,” said Winkelmann. “If you look at the longer time scales, at some point it will become the key level rise when it comes to sea level rise.” 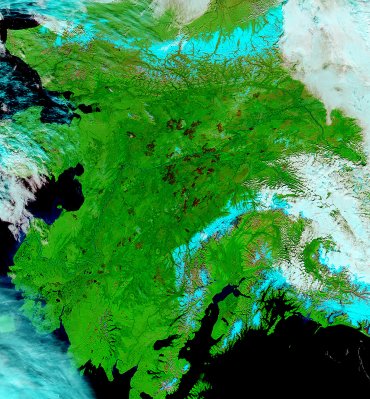 Satellite Images Show How Wildfires Have Devastated Alaska
Next Up: Editor's Pick