British Lawyer Under Fire for Calling Out 'Misogynistic' LinkedIn Compliment

A young female lawyer in the U.K. is facing intense backlash after she called out an attorney thirty years her senior for complimenting her LinkedIn picture.

It all started when Charlotte Proudman, a 27-year-old barrister, asked to “connect” on LinkedIn with Alexander Carter-Silk, a senior solicitor aged 57. Carter-Silk responded with a message commenting on her “stunning picture,” noting that it would “definitely win the prize for the best Linked In picture I have ever seen.” Proudman responded that she found the comment to be an example of “unacceptable and misogynistic behavior,” and said that commenting on her looks “silences women’s professional attributes as their physical appearance becomes the subject.”

Then, she tweeted it.

And that’s when the trouble started. She was called a “Feminazi” on the cover of the Daily Mail, trolled on social media, and reportedly told by colleagues that her career was ruined for calling out Carter-Silk in public.

“If that is what counts as ‘objectification’ and ‘misogyny’ these days, then the human race is in deep trouble,” wrote journalist Sarah Vine in the Daily Mail. “It’s not as if he sidled up to her in a bar and pinched her bum, or thrust his unwanted attentions on her on a bus. This alleged act of sexism happened in the ether. Even if it had been genuinely fruity, it was definitely harmless.”

While barristers and solicitors make up the framework of the legal system in the U.K., it’s slightly different than it is in the U.S., and those distinctions are important for understanding this story. Barristers are advocates, usually experts in their fields, who specialize in courtroom arguments and litigation (they’re the ones you see in black silk and wigs in court). Solicitors form a separate branch of the legal profession, legal practitioners who often work for big firms which employ barristers to advocate on behalf of their clients.

Therefore, barristers like Proudman rely on their professional relationships with solicitors like Carter-Silk, which is why a comment like this has such professional ramifications. Women are also underrepresented in the profession, with only 5,545 female practising barristers in 2014 compared to 10,140 male ones, according to the Bar Standards Board. That probably had something to do with Proudman’s decision to expose what she saw as pernicious sexism within the industry.

Proudman spoke out against the backlash Thursday, telling London newspaper the Evening Standard that she is “not a man-hating feminazi,” just a feminist who wants more women to speak out about sexist treatment. “There is a continuum between receiving a sexist message on LinkedIn and being discriminated against in the workplace. It has a huge, profound effect on women’s career opportunities making them feel uncomfortable working in male dominated places, for example in the law. That is why I try to nip it in the bud before it escalates,” she said.

“Ordinarily I would’ve deleted it. Then I clicked on his profile and saw that he was a partner in a solicitor’s firm. This is somebody with a duty to others; a professional who knows that sex discrimination is not tolerated in the workplace — for him to then perpetrate that against another legal professional was blatantly unacceptable.”

Carter-Silk has been largely avoiding the press in the aftermath of this incident, but gave a statement to a legal blog Tuesday.”Most people post pretty unprofessional pictures on Linked in, my comment was aimed at the professional quality of the presentation on linked in which was unfortunately misinterpreted,” he said. 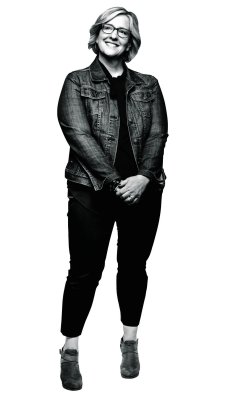