'NeuroGum' is Now a Thing

The thing: A new brand of caffeinated gum called NeuroGum, which launched Sept. 10 on Indiegogo. One piece contains 40mg of caffeine (a cup of coffee has around 100mg or more). The co-founders, entrepreneurs Kent Yoshimura and Ryan Chen, raised more than $11,000 in three days, quickly meeting their $10,000 goal.

Yoshimura says he doesn’t expect people to replace coffee with a couple of pieces of gum, “but I could see people definitely either supplementing it if they don’t like the bitterness of coffee or the coffee breath,” he says. The gum is available for pre-ordering, and each pack will cost about $3.95.

The hype: NeuroGum is marketed as “nootropic caffeine + L-theanine blend with brain boosting B-vitamins [that] are scientifically proven to enhance focus and cognition, all while giving you a fresh breath of energy without the jitters or crash.” The founders say NeuroGum uses the effects of nootropics—compounds thought to improve mental function, sometimes called “smart drugs”—as well as caffeine and a few supplements. “Caffeinated gum already exists on the market, but in our experience it tastes terrible,” says Yoshimura. “We also didn’t want to create something that makes you energized and then 20 minutes later you are crashing. We wanted to create something that kind of slows down the peak of the caffeine so you have an even boost.”

The research: The founders of NeuroGum say there are benefits to taking caffeine with a supplement called L-theanine, which is a compound found in green tea. Their website cites several studies, and the founders write: “It has been shown that L-theanine may interact with caffeine to enhance performance in terms of attention switching and the ability to ignore distraction; this is likely to be reflective of higher-level cognitive activity and may be sensitive to the detrimental effects of overstimulation.”

But is that true?

Not exactly, says John J. Foxe, director of Research of the Children’s Evaluation and Rehabilitation Center at Albert Einstein College of Medicine. “The claims are overblown,” he says. Foxe authored a paper published in The Journal of Nutrition that was cited on NeuroGum’s website as evidence of the scientific basis for the gum. “We did a series of studies on L-theanine and found incredibly modest effects,” says Foxe. “We were explicitly studying attention, and we would get these very mild improvements in performance for L-theanine used in much higher doses than in this gum. I don’t doubt that caffeine and L-theanine interact. They probably do, but we are talking about incredibly modest effects at much higher doses. And [the finding] is not something that’s been replicated widely. “

Kimberly Urban, a postdoctoral research fellow at the Children’s Hospital of Philadelphia who has studied nootropics and the brain, says that NeuroGum contains a dilute mixture of the same ingredients as most energy drinks. “Caffeine is a nootropic, with known stimulant and cognitive improving effects; that’s why most adults drink it in the mornings,” she says. “It’s a psychostimulant, much like Ritalin, cocaine, or amphetamine; it’s just not illegal,” she says. “The scientific research behind the gum seems OK … but I don’t see anything that would make their product substantially different than the existing slew of energy drinks or supplements out there already.”

In Urban’s opinion, the major difference is how caffeine is administered. “Primary absorption through mucous membranes in the mouth is faster and more complete than digestion, so you would have a stronger effect per amount of chemicals than if you ate or drank it.”

When asked to respond to the researchers comments, Yoshimura told TIME in an email, “In my own experience, and the empirical evidence from experience of other nootropic users on sites like Reddit and nootropic forums, it seems there’s a reason why caffeine with L-theanine is a very popular combination,” he said. “The caffeine alone gives energy and alertness while the L-theanine balances it out with its anxiety reducing and stress relieving properties. In this sense, we believe the combination makes NeuroGum a much more effective energy product.”

The taste: When TIME’s Health team tried NeuroGum, everyone enjoyed the taste. One person said she felt more “alert” after chewing it, though she wasn’t sure if that was due to the gum or not. Another said “I don’t like the idea that gum would do anything to my brain, even if it’s supposedly a good thing.” Everyone who tried it agreed they wouldn’t swap a cup of coffee or tea for a piece of this gum, but they preferred it to a sweet energy drink.

The bottom line: The U.S. Food and Drug Administration is still investigating the safety of caffeine added to food and beverages. The investigation announcement in 2013 caused Wrigley’s to pull the plug on plans to release its own caffeinated gum—though plenty of other products on the market, from mints to jelly beans to gum are available on the market. The FDA says that the only time the agency has explicitly approved the added use of caffeine in a food product was for cola in the 1950s. Yoshimura says that people who have had any bad experiences with caffeine in the past should consult their doctor before chewing it. 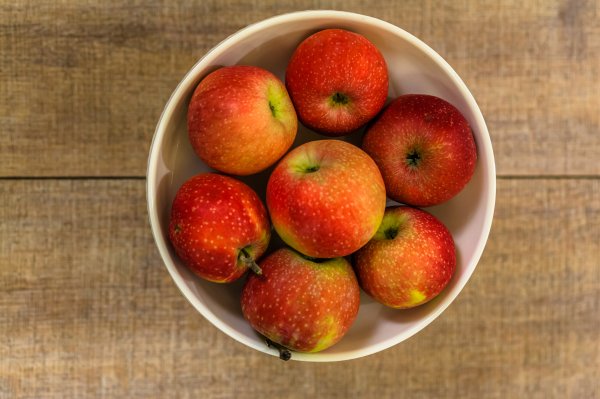 Apples Are the No. 1 Fruit Kids Eat
Next Up: Editor's Pick