Everything You Need to Know About Marvel's Jessica Jones

Marvel hero Jessica Jones is coming to Netflix on November 20, the streaming service announced today. Here’s what you need to know about the hero and the show.

Jessica Jones is an orphan with superpowers

Jessica Jones was riding back from a family trip to Disney World when a military convoy carrying radioactive chemicals collided with her family’s car. Her brother and parents were killed, and Jessica went into a coma. When she woke up, she discovered she had super-strength and the ability to fly.

After witnessing a fight between fellow high schooler Spider-Man and bad guy Sandman in her classroom, Jessica decided to try to use her powers for good and become a superhero called Jewel. Her attempts to fight crime ended tragically, and eventually Jessica settled into life as a New York private detective. In the show, she will have to contend contend with dangers that arise from her superhero past in the form of ominously named villain Dr. Kilgrave, a.k.a The Purple Man (played by Doctor Who’s David Tennant).

She has a posse

Jessica is also tied to more familiar heroes. In high school she had a secret crush on Peter Parker, a.k.a. Spider-Man., though it’s unclear if he’ll appear in the show now that he’s officially part of Marvel’s Cinematic Universe.

Her story is rated R

Jessica Jones made her comic book debut in the series Alias (no relation to the Jennifer Garner show). Alias was one of Marvel’s more mature comic books and included swearing and sex scenes. Jones herself is biting and sarcastic.

Staying true to the comics, Netflix has been touting the show as a psychological thriller.

She will be played by Krysten Ritter

The actress of Breaking Bad and Don’t Trust the B— in Apartment 23 fame told TIME last year that she gravitates towards playing “strong, powerful women”.

The series is being written by someone who really knows drama

Melissa Rosenberg developed the series. Previously a writer on The O.C. and head writer for Dexter, Rosenburg has also flexed her muscles on the big screen with Step Up and the Twilight series.

Her show is part of Netflix’s Defenders series

Netflix’s Daredevil, released in the spring, was just the first in a series of Netflix shows about a group of heroes called “The Defenders,” a sort of on-the-street, gritty version of the Avengers.

Jessica Jones is the second New York City hero to make it to the small screen and will be followed by Luke Cage and Iron Fist. After those series are released, Netflix plans to bring all four heroes together in a Defenders mini-series.

Despite having churned out dozens of films and TV shows, Marvel has yet to center a story on a woman with superpowers. (Peggy Carter from Agent Carter is a badass spy, but still human.) Jessica Jones will be their first, and a Captain Marvel movie about fighter pilot Carol Danvers who gains the ability to fly and shoot beams out of her hands will follow in 2018.

DC is similarly hoping to capture a wider viewership with two upcoming projects starring women: a Supergirl TV show, which premieres in October, and a Wonder Woman movie in 2017.

Read Next: Melissa Benoist: Playing Supergirl Taught Me ‘Not to Take Any Crap’ 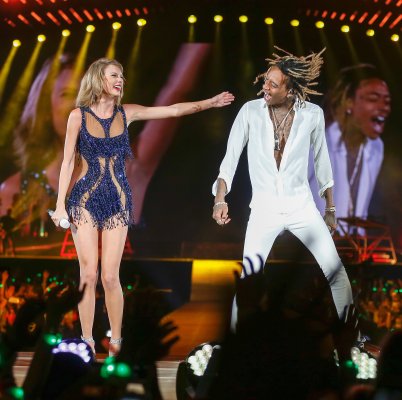 Wiz Khalifa Joined Taylor Swift On Stage For an Emotional "See You Again" Duet
Next Up: Editor's Pick