How to Save Our Sick, Neglected Oceans

Without the oceans, Earth is just another rock in space. Human survival depends on healthy oceans. They produce up to 70% of the oxygen we breathe, provide essential protein for billions, and absorb vast quantities of carbon from greenhouse gases. They make our planet habitable.

Yet we know more about the dark side of the moon than the depths of the ocean. While robots patrol Mars and billion-dollar missions probe deeper into space, 95% of our oceans remain unexplored and largely unknown.

We know with certainty, however, that our oceans are sick. Mass displacement of marine species from warming seas, expanding “dead zones” from chemical pollution, eight-million tons of animal-choking plastic garbage dumped every year, rapidly increasing acidification, and gross overfishing all threaten the extinction of entire ecosystems in our lifetime. Meanwhile, rising sea levels risk overwhelming coastal metropolises and weather-inflicted catastrophes are growing in force and frequency. These are symptoms of serious illness. Untreated, Earth will become uninhabitable.

Simply put, the current paradigm for ocean exploration and research isn’t working. Limited funding and international collaboration are too fragmented and unfocused, while misguided commercial interests push us closer to our own extinction.

Last year, for example, the ocean research community lost its flagship exploration vehicle Nereus while the deep-sea robot was probing the Kermadec Trench more than six miles deep in the South Pacific. Nereus cost $8 million to build and was the only vehicle of its kind in the world. We can build another, but we’ve lost years of deep-sea research. Meanwhile, as the oceans continue to degrade, we’ve little understanding of what we’re losing, let alone how to reverse the accelerating damage.

If mankind’s survival is our paramount security objective, then saving our oceans is a fundamental imperative. Yet the National Oceanic and Atmospheric Administration (NOAA) will never have NASA’s budget or more than a tiny fraction of one of America’s behemoth security agencies. We need a new paradigm for ocean exploration and research that optimizes finite public and private funds, maximizes international, cross- disciplinary scientific collaboration, and creates commercial incentives for remediation and conservation.

We need a CERN for the oceans.

The European Organization for Nuclear Research (CERN) is something of a misnomer. Anyone who has worked there knows it’s a beehive of highly focused, cross-disciplinary research by a relatively small permanent staff supported by thousands of scientists and researchers who regularly rotate through from universities, corporations, and government agencies from around the world. The result is not only “big science” discoveries like confirmation of Higgs boson, but also transformational breakthroughs such as the World Wide Web.

CERN is supported not only by its host, the European Union, but also by corporations like IBM, Intel, and Siemens, private foundations, universities, and many non-EU government agencies that send their scientists and engineers to participate in CERN research. The result is an amazing confluence of human intelligence focused on tackling specific problems and producing concrete results.

A CERN for the oceans would also serve as an important multinational incubator for more effective global ocean management policies. Knowledge informs solutions, which in turn shape policy.

This is doable now. First, a government must step up to sponsor a new multinational oceanic research consortium (as the EU did for CERN), preferably one that can host thousands of scientists at any given time, has existing research infrastructure and a history of fostering innovation, is already sensitive to the oceans, and is easily accessible on short notice from anywhere in the world. (Singapore comes to mind as a venue satisfying these criteria.)

Second, sanctioning from a supra-national organization like the U.N. would help.

Third, we need to concentrate funding from philanthropies (Pew Charitable Trusts, the Schmidt Family Foundation, and many others that have strongly supported ocean research and conservation) and corporations (Google, Lockheed Martin, major energy companies, and many others have definable commercial interests in the oceans) while enlisting research support from academic and government institutions from around the world to focus on definable research objectives.

Finally, it is vital to channel research conclusions to an international policy and governance platform capable of implementing better ocean management policies.

In a world where so many problems seem insoluble, this is not only achievable, but urgent. A CERN for the oceans doesn’t require tens of billions for a Large Hadron Collider. It needs the existing ocean community, preferably under the auspices of the U.N., to come together and decide to make it happen.

Grace Young is an MIT ocean engineer, aquanaut, and Marshall Scholar focused on underwater imaging at Oxford University. She has worked for NOAA, Woods Hole Oceanographic Institute, and CERN. Last year she lived underwater for 15 days as a mission scientist on Fabien Cousteau’s Mission 31. 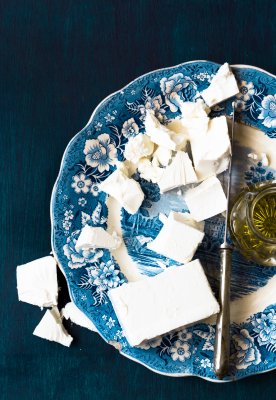 What the U.S. Can Learn From Champagne, Feta and Gouda
Next Up: Editor's Pick