As fighting between government troops and Kurds in the country’s southeast escalates, the leader of Turkey’s pro-Kurdish opposition party has warned that the country risks being pushed into a serious internecine conflict.

The Associated Press reports that Selahattin Demirtas, head of the Peoples’ Democratic Party (HDP), has accused the government of wanting “to create a civil war.”

His remarks come after crowds set fire to the HDP headquarters in Ankara, torched the local headquarters in the southern city of Alanya, and damaged several other party offices in at least six cities Tuesday night, according to al-Jazeera. The offices of two newspapers were also attacked as thousands of nationalist protesters took to the streets of the capital Ankara, Istanbul and other cities Tuesday, demonstrating against deadly attacks on security forces by the militant Kurdistan Workers’ Party (PKK) in recent days.

The nationalists accuse the HDP of being the political wing of the PKK rebels, a claim the HDP denies.

“It is not us (the HDP) who has taken the decision to start this war and intensify it,” Demirtas said, according to AP. “They want to create a civil war and the last two days have been rehearsals for that.”

Demirtas has also questioned whether a general election, scheduled for Nov. 1, could go ahead while temporary military curfews were in place in dozens of areas in the country’s mainly Kurdish southeast, the BBC reports.

The violent street demonstrations follow two deadly PKK assaults on security forces. An army convoy was bombed Sunday, killing 16 soldiers and on Tuesday, 14 police officers lost their lives in an attack on their minibus.

In response to the bombings, the Turkish military has stepped up its campaign against the rebels by launching air strikes on PKK bases in northern Iraq. For the first time since a cease-fire began two years ago, Turkey sent ground troops over the border into Iraq on Tuesday to hunt down Kurdish militants.

Violence between Turkey and Kurdish rebels has intensified since a 2013 ceasefire broke down in July, when a suspected ISIS suicide bomber killed 32 people in the Turkish town of Suruc. 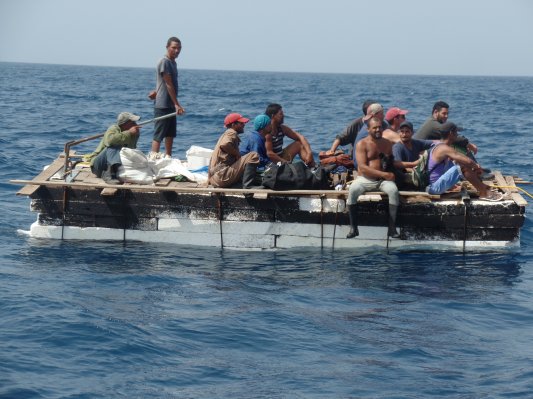 More Cuban Migrants Crossing to U.S. by Sea
Next Up: Editor's Pick