David Brock, founder of Correct the Record, speaks at the Clinton School of Public Service.
Danny Johnston—AP
By Michael Scherer

David Brock, one of the most influential operatives in the Democratic Party, never doubted that he would spend the 2016 cycle working to make Hillary Clinton president. The question was how he should do it while staying on the right side of the law.

The answer it turns out was a little bit of both. As his lawyers drafted memos with his options for how to keep his activities legal, he found that he could keep his hand in several different operations at the same time without running afoul of the law, helping manage Correct the Record, a super PAC devoted to defending Clinton, while staying on the board of a separate super PAC that raises money to promote her campaign. The first group has close ties to the Clinton campaign; the second, legally, cannot coordinate spending with the campaign.

This have-most-of-your-cake-and-eat-it-too approach could provide a sort of road map for future political operatives, who may soon find that the lines that currently define the campaign finance landscape are more blurry than they seem.

You could consider him the first in a new generation of super staffers who can effectively advise the candidate while continuing to raise and deploy unlimited amounts of money to get that person elected. “What they are doing with Correct the Record is groundbreaking,” explains Paul Ryan, a lawyer at the Campaign Legal Center, who is considering filing complaints with the Federal Election Commission and Justice Department challenging the group’s novel legal theories. “It is creating new ways to undermine campaign regulation.”

In his current role, Brock now works on what he calls the “coordinated” side of the Clinton campaign. His group, Correct the Record, raises unlimited funds outside the regulated campaign finance system. But since it does not pay for advertising advocating her election, he says he can continue under current rules to talk to her, and her campaign staff about strategy, while deploying the unregulated money he raises to advocating her election online, through the press, or through other means of non-paid communications.

At the same time, he has stayed on the board of Priorities USA, the group that will pay for much of the Clinton television advertising effort with unregulated donations that sometimes top $1 million from wealthy Democrats. Not only that, but he has established a joint fundraising committee that will raise money for both Correct the Record, the “coordinated” group, and Priorities, the “independent” group, at the same time from the same donors.

He has limited himself in one crucial respect. He will not involve himself in operational discussions at Priorities about how they plan to spend money for Clinton. “The problem will be I won’t be able to know their plans ahead of time,” he said of of his fundraising efforts for Priorities. “What I will have to sell is the concept and what they have done.”

He has also had to cut off operational discussions with another group he founded, American Bridge, which provides research to Priorities and the rest of the independent groups supporting Democratic federal candidates in the 2016 election. That said, American Bridge continues to operate out of an office space he shares near the U.S. Capitol with a leadership team he helped assemble.

Further adding to his reach, his lawyers have informed him that he can continue to work with other technically non-political groups he has founded, like Media Matters, his media watchdog group which has been critical of the New York Times and other news outlets for their coverage of Clinton. “Because 501c3s are not political organizations, the lawyers construed the C3s to be on the coordinated side of the wall because they are not making independent expenditures,” he said.

The situation sets up Brock as one of the most influential operatives in the Democratic Party, assuming Clinton wins the nomination. Since the mid-2000s, he has personally raised $150 million from wealth progressives, mostly individuals, to fund his operations. He says he expects to raise at least $50 million more by the end of the 2016 cycle.

“There is enough money in the system,” he said about the effort to elect Clinton, through large checks from wealthy progressives that will fund television ads and rapid response work. He said the effort recently completed a study of pro-Clinton “giving capacity.”

“We came up with 800 donors who could give $1 million or more,” he said. “That doesn’t mean they will. But they could. So that’s not a terrible number.”

To read more of TIME’s interview with Brock, check out the magazine story here. 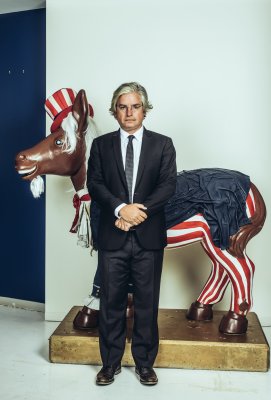