Here's What Photographers Think About the New iPhones

Apple’s new iPhones pack a flurry of photography upgrades: a new 12-megapixel sensor, 4K video recording and a front-facing flash that utilizes the phone’s display to produce better-looking selfies. But the most-talked about new feature is one that could transform how we experience photographs.

Apple called this feature Live Photos. When you press the camera’s shutter, the iPhone will record a bit of video before and after the desired shot. The result is a living photograph.

The feature is not new. Nokia already offers a shooting mode called Living Image, which captures a bit of video prior to shooting an image. However, Apple has added sound and made them easier to create and consume – Live Photos will come alive on all of Apple’s devices.

“Telling stories is about creating deeper connection between subject and audience,” says travel photographer Austin Mann. “The more information our camera (or device) captures, the deeper, more intimate those connections can be. Live Photos is a great example of how the iPhone pioneers a new way to capture even more information, enabling us as storytellers to really take our viewers into the experience.”

Mann hopes to be able to tell deeper stories and share experiences around the world using the Live Photos feature, which, photojournalist Ben Lowy says, will work well for travel photography. However, he tells TIME, “I don’t know if I would use that in a conflict zone.”

For Olly Lang, a mobile photography consultant, Live Photo files could become a sort of contact sheet for photographers and audiences alike – “a sort of mobile proof” of what happened in a particular situation, he tells TIME. More importantly, he adds, it could redefine how journalists and editors tell stories, especially on social media apps such as Snapchat and Instagram. “Possibly this allows editors to customize content – images for Instagram and video into Snapchat,” he says.

Yet, Lowy adds, Live Photos is moving us closer to a world where our consumption of news will be done predominantly on screens – such as the transparent devices commonly seen in futuristic movies where static images come alive.

Before we get to such a future, Live Photos will have to be supported by the software applications that have come to rule our digital lives. Already, Apple has announced that Facebook will support the feature before the end of the year. But what of Apple’s smartphone rivals, like Google’s Android and Microsoft?

Of course, the boost in the number of pixels from eight million to 12 million will further popularize the use of the iPhone among professional photographers, predicts Michal Koralewski, a Polish photographer and this year’s winner of the iPhone Photography Awards. “The new 12 megapixel camera is a significant leap in resolution over the camera I have in my iPhone 5s,” he says. “That means bigger photos, more details and more space for cropping. This is something really important for my friends and I from the ‘Mobilni’ photography group in Poland as we organize several mobile photography exhibitions a year and the ability to print bigger pictures without loosing the image quality is a huge improvement.”

Brad Mangin, a sports photographer who has produced several books about the San Francisco Giants, agrees. “I can’t imagine how great the files from the iPhone 6S will look,” he says. “I am anxious to get my hands on one of the new iPhones and take it out to the ballpark for the end of the regular Major League Baseball season and the post season in October to continue making iPhone Instagrams to add to my Instant Baseball project.”

While the new features will, without doubt, play a role in consumers’ decisions to upgrade or not, Mann notes that Apple often underplays its technical rhetoric, focusing instead on the user experience. When Apple unveiled its new Deep Trench Isolation technology to isolate individual pixels from one another, it summarized it with a simple message: the new feature will make your images richer in color, less noisy and smoother. “This is exactly why the iPhone camera continues to command the lead in their market,” says Mann. 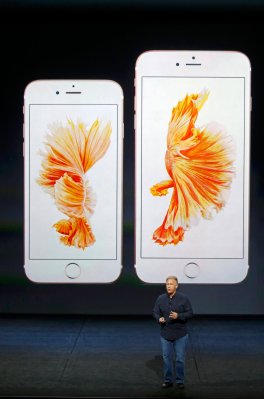 This Is the New iPhone's Coolest Feature
Next Up: Editor's Pick